Note: Due to technical limitations, this article's title has been changed from "Agent #18" to "Agent 18". 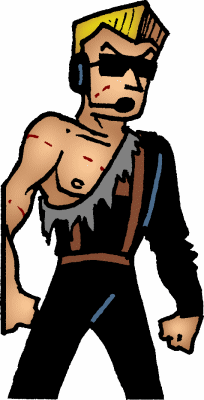 Status: Alive, under the control of the Alien Invaders

Another field agent from the Undisclosed Government Agency, Agent #18 first appears during the build-up to the Battle of Manhattan in Surreptitious Machinations. He is a gruff, no-nonsense, by-the-book agent who always wears dark sunglasses, never cracks a smile, and whose sense of humor is primarily limited to sarcasm and an incredibly dry wit. Despite his abrasive personality, he is one of the U.G.A.'s most decorated and valuable agents, as his low agent number seems to attest. His true name is currently unknown, as is virtually everything about his past.

Agent #18 led the charge to drive C.R.U.D.E. from the Statue of Liberty during the Battle of Manhattan (see Surreptitious Machinations: Chapter 8: Wars and Confrontations). In its aftermath, while Fooker and Agent #12 were tracking down Doctor Nefarious and Doctor Not, it was #18 who was in charge of apprehending Trudy, chasing her as she tried to make new alliances, tracking her interactions with certain impressionable hackers, and eventually facing her one on one. Trudy ultimately was the victor in that fight, and it was apparent during their later meetings that he definitely held a grudge.

During To Thine Own Self..., #18 joined other U.G.A. agents in accompanying Fooker and his friends to the alternate universe of Emperor Nicholas the Puissant to rescue Nick from his alter ego's clutches. #18 joined the team in infiltrating the Emperor's palace and was instrumental in defending the group as they made their escape home. We may have briefly come in contact with his alternate counterpart, although it is uncertain whether the two are the "same" person.

When Nick and Trudy were sent by Dwayne on a business trip that lasted about a week to meet with Lakatos Pharmaceuticals, their adventure resulted in the pair being caught in a terrible car wreck and being sent to a nearby hospital. Not long after their arrival, Agent #18 also arrived to investigate the events. The sudden destruction of the Lakatos resort was strongly suspect, and with Nick and Trudy being the only living witnesses, their protection quickly became his top priority. During a brief phone call to Fooker, he revealed that Lakatos was at the center of a plot that was "bigger than anyone can imagine" and that Fooker's friends, as well as himself, were "as good as dead". He issued a similar warning to Trudy before being apprehended by the local authorities. The police sergeant in charge doubted Agent #18's "FBI credentials" and suspected he had come to the hospital to finish the job and assassinate Nick and Trudy. However, when the sergeant had Agent #18 locked in a supply closet, the agent quickly discovered the sergeant had ulterior motives. Agent #18 was quickly taken over by a mysterious unknown force.

Over the next month or so, Agent #18 served as a double-agent, a mole within the U.G.A. ranks. His slightly off behavior eventually drew the suspicions of Grey drones #3141592 and #6626068, who had been hiding in the Mister Inertia mech within U.G.A. custody. The aliens managed to convince Agent #12 not to trust him, albeit subconsciously. She was barely able to convince Justin of these suspicions before #18 announced Amadeus' "retirement" and the return of Colonel Lionel Barker to the U.G.A.

During Scylla and Charybdis, Justin informed Fooker of how Agent #18 supervised the Colonel's "screenings" of U.G.A. agents, looking for a nebulous threat from within. The "screenings" were actually a systematic "induction" of agents into Physaric "puppets". Justin was barely able to escape with drones #3141592 and #6626068 before his own "induction". During the story's climax, Nick managed to free all the Physaric "puppets" using a signal broadcast over the global cellular network. Agent #18 was seen not only free from Physaric control, but fighting back. It is assumed that he, like the rest of the human race, is currently frozen in time on the missing Earth, which is "lost" in a pocket universe somewhere.

Due to technical limitations, this article's title has been changed from "Agent #18" to "Agent 18". MediaWiki cannot display hash/pound signs in page titles.

Some Faulties repeatedly confuse Fooker's brother Justin for Agent #18 and vice versa. This is probably due to their similar hair styles and the fact that they both tend to wear glasses. To tell them apart, Justin's face is round like Fooker's, as are his glasses. Agent #18's face is more rectangular and his sunglasses are trapezoidal. The easiest distinction to identify is the sunglasses; #18 tends to wear them regardless of the ambient light level, and we have never seen him without them. Jeff once posted this sketch to social media to try and help sort out the confusion.