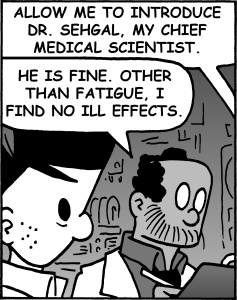 Little is known about the alternate universe version of Akhilesh Sehgal, other than the fact that he was also a medical doctor and that he was in the employ of Emperor Nicholas the Puissant. Like many in this "negaverse", he seemed to display traits much the opposite our universe's counterpart: ruthless, sadistic, and eager to use his knowledge for less than noble ends. It was Sehgal who learned how to drug the Great Skaboola and subjugate the Grey Aliens, and who kept Trish alive during her long sojourns into the "virtual reality" of GPF's universe. With the fall of the Empire, Sehgal's ultimate fate is unknown.