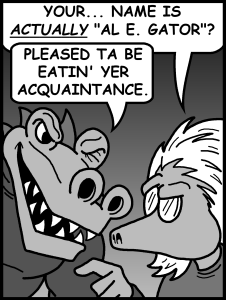 Distinguishing Characteristics: Incredibly strong and durable, dumb as a rock

Of all of D.C. Smythe's rogues gallery, Al E. Gator is one of the least mysterious. This is largely because he doesn't have much to hide and, even if he did, he's not quite cunning enough to bother. Born in the Florida Everglades, Alexander Eswald Gator was quickly transplanted to England, where his parents became performers with a traveling circus. His father and mother often took turns as the circus' "strong man", as many patrons unfamiliar with the secondary sexual characteristics of alligators could rarely tell them apart. Young Al quickly found a place in the circus' backstage crew until both his parents died in a tragic accident. Al was raised by his circus family for several more years, picking up a thick Cockney accent, until the circus disbanded. With nowhere else to go, he quickly fell into the wrong crowd and became a petty thug, drifting from job to job working as hired muscle.

At some point, Gator came into contact with the shady mercenary Joe T. "Tee" was not very found of the lumbering, dimwitted Gator, but he found the reptile's raw strength and enormous fortitude useful. Soon the two became a package deal, moving up the ranks in the violent world of mercenary work, until they finally came into the employ of the mysterious Doctor Shadow, whom they have worked for exclusively ever since.

Gator is an extremely simple creature. Even he will admit that he isn't very smart, although from time to time he shows surprising flashes of insight. What he lacks in intelligence, however, he more than makes up for in brute strength. He is almost super-humanly strong and has reservoirs of vast endurance, and his tough scales, thick skeleton, and wall of muscle allow him to take a pounding. He is also a gifted marksman, relying more on intuition than thoughtful precision. He will often rely on his frightening reptilian appearance and reputation for intimidation, at times threatening to eat his opponents, although it is unknown if he has actually done so. Despite this, deep inside this formidable exterior he may also hide a softer side, which occasionally manifests in his almost schoolboy-like crush on Smythe's partner, Valerie Smith.

Our gang encounters Gator when Fooker, Sharon, Trudy, and Stewart Johnson become trapped in Smythe's universe and thus caught up in their investigation. They track "Tee" to Shadow's underground lair where they are ambushed by Gator. After Shadow delivers his villainous monologue, Fooker frees himself and his colleagues and a battle ensues, with Gator and Johnson battling head-to-head. Regrettably, Shadow pulls a surprise tactic on the heroes, stunning them long enough for him and his henchmen to escape.

First appearing in Jeff's original D.C. Smythe comics in 1985, Al E. Gator remains one of Smythe's oldest recurring villains. Originally envisioned as a petty thug, Gator initially showed surprising cunning, but his intelligence quickly plummeted as he was repeatedly cast as a henchman and crony to greater villains. Eventually he fell into the employ of Doctor Shadow and has rarely acted independently since. He is almost always paired with Joe T., with "Tee" serving as the brains to Gator's raw brawn. Interestingly, in their first ever appearance, "Tee" and Gator were trying to kill each other over some trivial, unmentioned slight.

Many of the D.C. Smythe characters, including Gator, have been regular fodder for the Jeff's Sketchbook feature of GPF Premium.