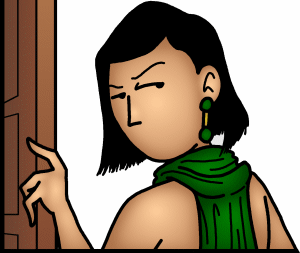 Trudy once revealed that her and Sharon's criminal mastermind mother didn't trust men and populated her "inner circle" with trusted, highly loyal young women. Although there is a lot of "churn" within this group, she also stated that if "someone were to show a high level of initiative", they might work their way up to the top.

"Anna" was as close to the top as one could get. As Esther Matusevitch's chief lieutenant, she was second in command within the matron's criminal empire. She had been known to pose as Elsbeth Diederich (one of Matusevitch's many aliases) to throw investigators off their tracks and occasionally pretended to be her daughter. She was highly intelligent, extremely business-like and professional, and often stoic and expressionless. She was a very analytical thinker and tended to thoroughly assess every situation before choosing to act. Although she obviously had little qualms with white collar crime, she abhorred violence and wanted little to do with those who use it.

During "Masquerade", we learned that Lakatos Pharmaceuticals was a front for Matusevitch's then-current operation and that she was in league with Colonel Lionel Barker and his mysterious plans to "forcibly induct" small business owners into his organization. When Nick and Trudy escaped indoctrination and fled the Lakatos resort, the Colonel's men pursued them until the pair crashed their car and were taken to a nearby hospital. When the Colonel proposed assassinating the pair, Matusevitch balked. The Colonel ordered the Lakatos resort burned to the ground, leaving the fate of Lakatos, Matusevitch, and Anna up in the air.

During Scylla and Charybdis, Matusevitch revealed to Trudy that once she had outlived her usefulness, the Colonel "disposed" of her, effectively cutting the head from her empire. In the process, many of Matusevitch's lieutenants—including Anna—were turned into Physaric "puppets", continuing to run her empire in her absense. Anna's fate is currently unknown, although it can be safely assumed she was freed from Physaric control when Nick freed the other "puppets" on Earth. As such, she is likely frozen in time with the rest of the planet's inhabitants.