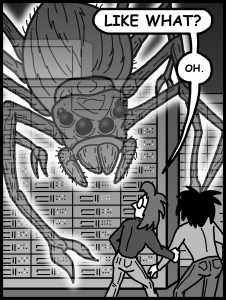 First Appearance: Harry Barker and the Chatroom of Enigmas (January 19, 2011)

In Sharon's dream world of Harry Barker, Arachnode is a virtual construct and artificial intelligence created by Dexter some time in the past. It is a "web crawler" or "spider", a program that systematically crawls through a network, gathering data and indexing it so a subsequent search engine can be used to find the data later. Thanks to the virtual reality projectors scattered throughout Hollerith's School of Phreaking and Hacking, Arachnode manifests itself as a large, translucent spider, approximately the size of a full-size car. It prefers the solitude of the Forbidden Server Farm, where it can quietly do its job without interference.

Shortly after it was written, Gnawthrylilees used Arachnode to blackmail Dexter for the death of Mumbling Minnie, resulting in Dexter being banned from hacking for the rest of his life. When a series of attacks threaten the safety of the school, Dexter is falsely accused and briefly imprisoned in Angband Prison. Dexter's not-so-subtle clue leads Harry and Donald Measly to the Forbidden Server Farm, where they find Arachnode and the evidence to prove Dexter's innocence.

Arachnode is analogous to Aragog the Acromantula from Harry Potter. The name "arachnode" was chosen for this "character" primarily because of its similarity to "arachnid", the scientific classification that includes spiders. It is also coincidentally an open source .NET web crawler written in C# using SQL 2005/2008.