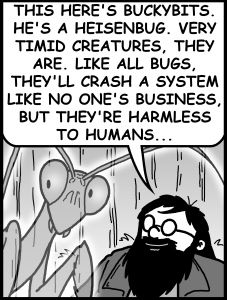 First Appearance: Harry Barker and the Prisoner of Angband (July 18, 2016)

In Sharon's dream world of Harry Barker, Buckybits is a heisenbug, a combination artificial intelligence and virtual reality construct similar to a data ghost. He manifests himself visually as a somewhat translucent, anthropomorphized praying mantis standing over 7' (2.134 m) tall. Although the exact origins of heisenbugs are unknown (as it seems odd that a programmer would have created them to serve such a purpose), they tend to have an insatiable curiosity for electronic gadgets but will invariably cause such devices to crash catastrophically if they come in contact with one. In the absence of electronics, they are relatively harmless, causing a gentle electrical tingling when coming in contact with human skin.

Dexter introduced Buckybits to Harry's third-year class at Hollerith's after he was promoted to professor of Digital Creatures. Although Buckybits was generally well behaved and Dexter warned the class ahead of time, Darco Mouso ignored Dexter's warnings and left his tablet unguarded. Buckybits' curiosity took over and he promptly destroyed the tablet, sending Darco into a rage. Darco appealed to his father, Luser Mouso, who in turn pulled strings with the Ministry of Hacking to have Buckybits deleted. When Harmony Stranger caught wind of his impending "execution", she grabbed Harry and Don Measly and attempted to intervene. The trio were interrupted in their rescue attempt, distracted by another series of events, and believed that his execution was successful. Later, Harry and Harmony used a GOTO function to travel back in time in an effort to save "Serious" Nick. In the process, they were able to sneak down to Dexter's hut and free Buckybits, saving him from deletion. Buckybits returned the favor by later saving the two from Dwayne Duncan, who had been transformed into a Beowulf and was mindlessly pursuing the pair. Buckybits was able to use his unique abilities to short out the virtual reality program that transformed Dwayne, returning him to normal. After freeing Nick from the debuggers, Harry and Harmony watched as Nick and Buckybits flew into the night and a new life of freedom.

Buckybits is analogous to Buckbeak the hippogriff in Harry Potter. He is also based on the "heisenbug" from the Jargon File, "a bug that disappears or alters its behavior when one attempts to probe or isolate it." In an effort to make him as cute and adorable a possible, a praying mantis was chosen to be his external avatar. His name also comes from the Jargon File; "bucky bits" refers to the signals produced by keyboard modifier keys, including Ctrl and Alt on a PC keyboard, Command and Alt on Mac keyboards, and especially several arcane modifiers on now-defunct classic keyboards, like the SAIL and MIT AI TV (Knight).