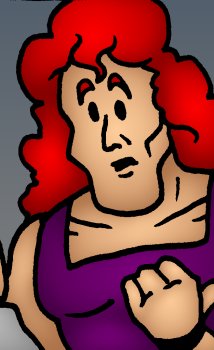 During To Thine Own Self..., when the rescue squad crossed into the "negaverse" in search of Nick, Trudy's counterpart brought Nick's friends to the headquarters of the resistance, hidden beneath the Emperor's palace. Although not initially mentioned by name, a surprising familiar face surfaced: Butch Kilgore, Fooker's former high school bully and one of Trudy's former boyfriends. Unlike his counterpart in "our" universe, this Butch was loyal, brave, and downright heroic, serving with the resistance nearly since its beginning. His massive size and formidable strength was certainly a valuable asset to their cause.

Butch discovered the "frozen" Pi and Planck after Persephone ran into them and took control of Pi in self-defense. Persephone forced Pi to shoot Planck with an inertial variance gun, placing him in suspended animation, then forced Pi to turn the gun on himself. Butch assumed Pi shot Planck by accident then in a panic shot himself. Butch reported this incident to "Nega" Trent as such and presumably Persephone wiped the Greys memories of the incident so they could not report it.

During the story's climax, Butch was a member of the diversionary team that raided the Emperor's palace while the rescue team sought to find Nick. When the rescue party was captured and brought to the Emperor's throne room, Chuck Walker arrived, posing as a double agent with a "captured" "Nega" Trudy in tow. Butch was one of the stormtroopers accompanying Trudy and Chuck. When Governor Duncan revealed that he was under the influence of the alien invaders, Butch shocked everyone by revealing that he too was an alien agent. The two explained the invaders' ultimate plan of playing both sides—the Empire and the rebels—against each other in order to destabilize Earth's sociopolitical climate and make it easier to conquer. When they called for the humans to surrender peacefully, Fooker reminded them of one minor technical detail: "We've still got guns." Fooker and Justin shot Duncan and Butch, killing them and forcing their alien controls to flee.