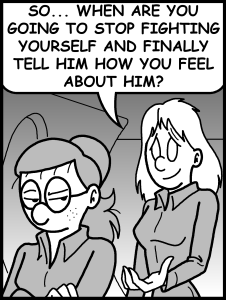 Following the events of Scylla and Charybdis, Nick called for volunteers among the human "survivors" aboard the Grey ship to help search for the missing planet Earth. Among those who stepped forward is Christine, better known as "Chris", a young woman with a fledgling thirst for adventure. Although initially hesitant, she attended the "all-hands" meeting and joined the volunteers in the hope of helping her family "and seven billion others I may never meet".

While we did not see Chris' first search mission, she later joined Dexter, Patty, and Trish in a search that took them to a universe that seemed suspiciously similar to The Legend of Zelda. There, Chris took on the role of Link, the adventuring hero. Despite not being one of the MUTEX "veterans", Chris fell into a leadership role easily and helped the "away team" stay on focus despite several distractions. While it is uncertain if the swordsmanship she displayed there came natural to her or if it was a function of assuming the "role" she was given by the MUTEX, she did display a preference for using her sword in her left hand, like Link in most Zelda games, perhaps indicating that Chris is naturally left-handed.

Chris has expressed an interest in cosplay, admitting she attended a convention in costume once with a friend. While giving Patty advice on her awkward relationship with Dexter, Chris hinted that Patty was "more [her] type", possibly indicating that Chris is a lesbian.