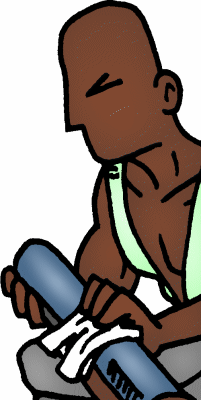 During To Thine Own Self..., when the rescue squad crossed into the "negaverse" in search of Nick, Trudy's counterpart briefly introduced the various members of the resistance against Emperor Nicholas the Puissant. To both Trudy's and Fooker's surprise, Chuck Walker was among them. The analog of their former neighbor, the "alternate" Chuck was once the good friend of Fooker's "alternate" until General Barker "betrayed" him. He reacted coldly to both of them, apparently expressing his own uneasiness with the "alternate" scenario with dispassionate aloofness. He was apparently unaware of Trudy's murder of "her" Chuck, but seeing him again had a profound affect on her.

During the raid on the Emperor's palace, Chuck was a member of "Nega" Trudy's diversionary team while the main team of Fooker, Ki, Trudy, Sharon, Dexter, and several U.G.A. agents sought to locate and liberate Nick. After the main team was captured and taken to the Emperor's throne room, Chuck arrived, revealing himself to be a double agent for the Emperor and dragging a captured "Nega" Trudy in tow. Fooker, Dexter, and Justin soon arrived, with the two spies masquerading as stormtroopers. Nick recognized Dexter's covert signal and prompted him to act. In the ensuing firefight, Chuck revealed that he was actually a triple agent and that his "capture" of "Nega" Trudy was merely a ruse to gain access to the control room. Chuck continued to be a valuable fighter even after the alien invasion began and the heroes fought to escape. Chuck was last seen escaping the palace with "Nega" Trudy (who had convinced everyone else that she was "their" Trudy) before its self destruction. Whether or not he survived the explosion is currently unknown.