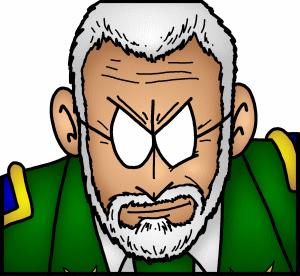 Colonel Lionel Mortimer Barker is the cold, calculating, ruthless mastermind behind the events of Scylla and Charybdis. A decorated war hero, founder of the Undisclosed Government Agency, and father of Jason and Justin Barker, Barker has a long list of accomplishments and valuable contributions to his country. He also has a wry and dark sense of humor. That said, his methodical machinations to navigate Earth through the crossfire of an interstellar war nearly handed the entire planet over to alien control, with the potential "acceptable losses" of millions of human lives if it meant ultimately preserving the human race. He shows no remorse for his actions, viewing everything through the cold precision of a military tactician.

"The Colonel and the Key Master"

When Nick and Ki washed up on a deserted island in the middle of their honeymoon, they ran into none other than Moldfinger, the ex-criminal mastermind and former member of C.R.U.D.E. As Moldfinger left the two to enjoy their time on his island as guests, he asked them to deliver a cryptic message to James Baud: "Beware the Colonel and the Key Master". For several years, the meaning behind this warning remained a mystery.

Some time later, Nick and Trudy were sent on a business trip as representatives of GPF Software to Lakatos Pharmaceuticals. When they became separated from the rest of the guests at the Lakatos resort, they quickly uncovered a covert plot to "forcibly induct" small business owners into some sort of brainwashed group. Trudy theorized that "Eszter Lakatos", the company's CEO, might really be Esther Matusevitch, her own mother, as "Lakatos" is a Hungarian surname originally meaning "locksmith". Nick remembered Moldfinger's prior warning, inferring that Matusevitch may be "the Key Master". Who, then, was "the Colonel"?

The pair were quickly captured by a group of paramilitary guards led by the "Smoking Man", who radioed the Colonel to ask what to do with them. The Colonel ordered that they be "inducted". Federal agent Nikki Ronat was inducted first with terrifying results. As the Smoking Man and his men pursued Ronat, Nick and Trudy made their escape, evading the guards and eventually fleeing the resort. When the Colonel's men pursued, the pair crashed their car, critically injuring them. They were rushed to a nearby hospital.

When the news reached the Colonel, he declared their mission at the resort to be a partial failure and ordered Nick and Trudy to be assassinated. When Matusevitch objected to her daughter's murder, the Colonel laid down the cold, hard facts: the pair's injuries would raise suspicion about what happened at the resort, likely sparking a full investigation by federal authorities. Any such investigation would compromise their entire operation. He ordered the resort to be evacuated then burned to the ground, and Nick and Trudy would not be allowed to live to see morning.

At the hospital, Nick slipped into a coma while Trudy awakened to find herself suffering amnesia. She could remember nothing about what happened at the Lakatos resort. When the assassin finally made his move, he decided that Trudy might still be inducted but Nick's injuries were too severe to salvage him. Before the assassin could murder Nick, there was an unexpected interruption that totally changed everyone's plans. Trudy and Nick (well, not quite Nick) were eventually allowed to leave the hospital, but whether or not they would remain under surveillance remained a mystery.

Still, none of this answered the fundamental question: Who is the Colonel? When the answer finally came, it was one few would readily expect....

The pieces at last fell into place when Agent #18 surprisingly revealed that "Amadeus" had stepped down as the head of the Undisclosed Government Agency. To replace him the Pentagon sent an old familiar face and one of the U.G.A.'s original founders... Colonel Lionel Barker. Even more has been revealed thanks to Fooker's server-room confessions to Sharon.

Very little was known at that time about Colonel Barker's past, but more and more pieces have been slowly revealed. He is currently a colonel in the United States Army and bears the branch insignia of the Infantry. He also wears a number of service ribbons and insignia denoting a long and distinguished career of service with the military. He is likely long overdue to retire at this point, but as Fooker put it, "I doubt a condo in Florida will compete with ordering snipers around in some Middle Eastern desert."

Barker graduated West Point sometime during the Vietnam War and was shipped off to Cambodia to combat the Viet Cong. Due to his quick thinking and actions, he saved the lives of several men in his platoon during a bloody ambush. Himself wounded, Barker was awarded the Purple Heart and spent a considerable amount of time in recovery. Although his injuries prevented his return to active combat, he eventually returned to Cambodia to serve as first executive officer then commander of his company. In later years, we was instrumental in the early formation of Delta Force and testified during the Iran-Contra Affair hearings. Although associated with a number of questionable operations, Barker personally "shone like a bright pearl", eventually landing him in the prime position to help found the U.G.A.

Life in the Barker home was apparently less than idyllic. It was during his time at West Point that Barker met and fell in love with his future wife, Madeline. However, the combination of his strict military discipline and post-traumatic stress likely acquired during combat caused the colonel to run "a tight ship", harshly and sternly raising his two sons. Jason, the eldest, resisted his father's strict hand and became a problematic, unruly "wild child", making barely passing grades and only by chance winning his way into college. Meanwhile, Justin, the younger "Barker boy", thrived under their father's tutelage and strove to follow in his footsteps, eventually becoming a model student and entering a prestigious military academy. Disappointed in his eldest son's flippant attitude, Colonel Barker poured his ambitions into his younger son, grooming him for a "pet project" he was working on: a covert operations group that would eventually become known as the Undisclosed Government Agency.

However, a clerical error resulted in Jason, not Justin, being tested as a U.G.A. agent. As Colonel Barker was not present, "Amadeus" was unaware of the switch, despite the slight difference in physical appearance and gross intoxication from alcohol. Surprisingly, Jason passed all the tests with impressive results despite his inebriation. (To quote one U.G.A. official: "If he's this good when he's drunk, imagine what he'll be like when he's sober.") Jason was eventually invited to become a member of the U.G.A. elite, disappointing Justin and infuriating the Colonel. When "Amadeus" refused to throw out Jason's test results, Colonel Barker stormed off and abandoned the project, leaving "Amadeus" solely in charge.

After this fiasco, the Barker household began to fall apart. The Colonel and his wife eventually separated and she passed away sometime shortly thereafter. As the two boys were both legally considered adults at this point, the Colonel cut off all contact with them. He vanished for a number of years, then resurfaced only to pay for Justin's college tuition. After this, he disappeared once again. Justin speculated that the Colonel went deep undercover, operating "overseas, perhaps in the Persian Gulf". Beyond that point, neither of the "Barker boys" heard from their father again... until he resurfaced at U.G.A. headquarters to take command.

"The Savior of the Human Race"

Following the Colonel's return to the U.G.A., he mentioned a vague "new threat" to the organization and to the entire United States, hinting at subversive elements infiltrating key governmental and industry positions. To combat this threat, he locked down U.G.A. headquarters and instituted a series of "screenings" to weed out infiltrators and verify the integrity of the organization. While Justin and Agent #12 were suspicious of these screenings, they had little evidence to stop them. Justin eventually learned that the screenings bore a eerie similarity to the "inductions" Nick and Trudy saw at Lakatos, and quickly found himself alone and on the run. With the help of the Grey drones #3141592 and #6626168 and their "Mister Inertia" mech, Justin escaped U.G.A. headquarters to warn his brother. Eventually, both brothers and aliens, along with Sharon, found themselves aboard a Grey research vessel, learning that the Earth was in imminent danger of invasion by another alien race.

Meanwhile, Fred, Dexter, Patty, and Trish tracked down Fred's mysterious "stalker" Socrates, who revealed himself not only to be the same species as Fred, but that both they (and Persephone) were actually aliens themselves. The group was knocked unconscious and brought aboard an alien ship, where they unexpectedly encountered Colonel Barker himself. Hoping to sway the humans to his cause, the Colonel outlined his knowledge of the Greys and a frightening encounter with a Physaric. Based on the evidence he had amassed, the Colonel believed Earth was about to be caught in a massive crossfire as the two warring alien species brought their interstellar conflict to our planet. Barker deduced that the human race's only hope for survival was to help the Physarics "conquer" the Earth and use their massive resources to defend the planet from the Greys. Once the Grey threat had been eliminated, he would liberate the humans from Physaric control, driving out the invaders, knowing full well that there could be "acceptable losses" in the millions of human lives. In the process, he saw this "culling" as a way to weed out the "cancer" of racism and social intolerance by uniting the human race against a common enemy, paving a way to unite the species and strengthen its future.

However, the Colonel did not get to see his plan come to fruition. Once the dispersed GPF crew re-established contact with each other, Nick devised a plan to negotiate a ceasefire. He contacted Colonel Barker and asked for all sides to stand down. Barker refused, accelerating the Physaric invasion. Using Fooker's hacked cell phone powered by Velociraptor, Nick broadcast the Colonel's ultrasonic anti-Physaric signal across the globe, forcing the Physarics to release their "puppets" and retreat. No longer in control of the situation and with his ultimate plan to double-cross the Physarics exposed, the Colonel was apprehended and placed into custody.

Once the climactic showdown was resolved, the Colonel was handed over to the humans and transferred to the Great Skaboola's ship. He remains in custody, although both Fooker and Justin refuse to speak with him. Sharon briefly talked with the Colonel while searching for her mother, but now shares her husband's opinion.