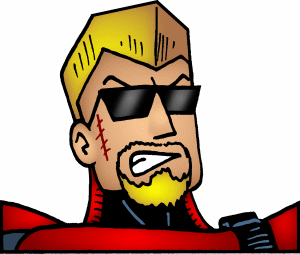 Commander Blawgus is apparently the alternate universe counterpart of the U.G.A.'s Agent #18. While we only have his appearance to go by (and the fact that he apparently wore sunglasses even under a helmet), the likelihood of a connection is pretty strong. Blawgus served as a stormtrooper in the employ of Emperor Nicholas the Puissant and personally led his troops into the sewers beneath to Emperor's palace to wipe out the resistance cell hiding there. Since this is the first and last time we see Cmdr. Blawgus, his ultimate fate in the climax of the story is unknown.