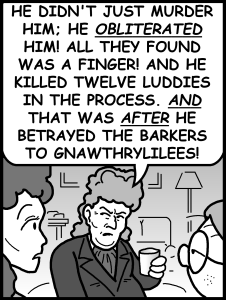 First Appearance: Harry Barker and the Chatroom of Enigmas (January 12, 2011)

In Sharon's dream world of Harry Barker, Coreleak Fud is the Minister of Hacking, the highest elected hacker official in the country and chief executive of the Ministry of Hacking. He is a squat, round, older little man with a shoulder-length pompadour and who often dresses in a waistcoat and ascot.

We first encountered Minister Fud during "Harry Barker and the Chatroom of Enigmas", where attacks against "mundanes" at Hollerith's drew criticism from the school's parents and board of directors. Fud came to the school to take Dexter into custody and send him to Angband as a precaution, as well as to ask Tim Dumpingcore to step down as headmaster of the school. Once the crisis was resolved, both Dexter and Tim were able to return. During "Harry Barker and the Prisoner of Angband", Harry spied Fud speaking to Patty McDongle in Hexadecimal Village and followed them under the cover of his cloaking device. Their conversation revealed how "Serious" Nick supposedly murdered Petey Petagrue and betrayed Harry's parents to Gnawthrylilees, as well as the fact that "Serious" Nick was Harry's godfather.

Fud is analogous to Cornelius Fudge in Harry Potter. Aside from the obvious similar-sounding names, he draws his name from two sources. According to the Jargon File, a "core leak" is "an error in a program's dynamic-store allocation logic that causes it to fail to reclaim discarded memory, leading to eventual collapse due to memory exhaustion." FUD stands for "fear, uncertainty, and doubt"; in Harry Potter, Cornelius Fudge's refusal to believe in Voldemort's return amounted to a form of FUD, which left the wizarding world unprepared the reign of terror that quickly followed.