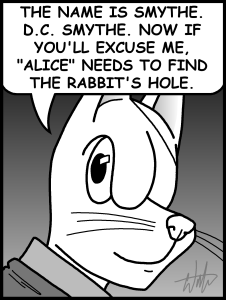 When Victor Brown sabotaged Velociraptor, he stranded Fooker, Sharon, Trudy, and Stewart Johnson in a parallel universe where they were all transformed into anthropomorphic "furry" animals. Before they had much time to adapt to the change, they were confronted by a tall, muscular cat sporting an eye patch, aiming a gun at them. When he learned that the group didn't have the information he needed, the cat prepared to leave, but was stopped by the Gamester, who was apparently on a first name basis with the stranger. After "pausing" time for everyone but them, the Gamester convinced the cat to help our heroes until the entity could find a way to bring them home. Reluctantly, the cat agreed, taking the "cosmic refugees" under his wing.

D.C. Smythe is a British SIS agent working "on loan" with the anti-terrorist coalition I.G.N.I.T.E. to bring down international criminals. He works routinely with CIA agent Valerie Smith in a relatively equal partnership, although Smythe seems to default to the senior partner. He is quite cunning and resourceful, and his intimidating size makes him formidable in hand-to-hand combat. While he often presents a reserved, no-nonsense exterior to most, those who come to know him well will find that he has a sharp, dry wit. He is extremely loyal and devoted to his country and to the freedom of others, and has numerous times laid down his life for those convictions. He can be quite secretive of his past, however, and refuses to speak about sensitive topics such as how he lost his left eye or even what the initals "D.C." stands for.

After reluctantly taking charge of our heroes, Smythe turned this liability into an advantage by integrating them into his investigation. With their insights, Smythe and Smith were able to make a connection between the mysterious "theNullBoyz" hacks and the "shadowCoin" cryptocurrency, eventually linking both to Smythe's recurring adversary, Doctor Shadow. The group tracked Joe T. to Shadow's underground lair but were captured, but a resourceful Fooker freed them. After a brief skirmish, Shadow managed to stun our heroes long enough to escape, but in his absence Fooker and Sharon were able to shut down both "shadowCoin" and the attacks against the world's chief financial institutions. Todd and Persephone, under the Gamester's guidance, then helped restore Velociraptor to working order, allowing our heroes to return home while Smythe and Smith closed out their investigation.

D.C. Smythe is one of Jeff's oldest regularly drawn characters, with the earliest dated sketches and comics stretching back to 1985. By the time Jeff graduated from high school, D.C.'s exploits had reached over 140 individual "issues" and several mini-series, which he collected into a series of binders as a means of both preserving and lending out the comics. Jeff reworked the character's premise in the early 1990s to avoid potential copyright and trademark entanglements, since the earliest version of the character was pretty much a "parody of a parody". D.C. is a central figure within Jeff's overall "multiverse", and likely would have been his first published project if GPF hadn't accidentally come into existence.

Many of the D.C. Smythe characters, including Smythe himself, have been regular fodder for the Jeff's Sketchbook feature of GPF Premium. Sketches prior to Smythe's appearance in the strip usually contain the descriptive but boring pseudonym "cat guy" in the title (although there may be other Sketches in the archive with those words that don't relate to Smythe).