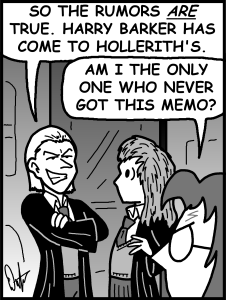 In Sharon's dream world of Harry Barker, Darco Mouso is a snobbish, elitist bully in the same class as Harry at Hollerith's School of Phreaking and Hacking. He has long white-blond hair slicked back against his head and a sharp, almost Trent-like nose. In his first appearance, he bullied Donald Measly by attempting to steal his mouse then warned Harry that he didn't "want to be seen associating with the wrong kind of people." His input device is currently unknown. He is in Mitnick Subnet.

In "Harry Barker and the Chatroom of Enigmas", he became Mitnick's new Quakish sniper, insulted Harmony Stranger by calling her a "mundane", and battled Harry in Hollerith's first hackers' dueling club match. At one point, Harry and his friends suspected Darco to be the "Sysop of Mitnick" who opened the Chat Room of Enigmas, but this was later proven to be false.

Darco is the analog of Draco Malfoy from Harry Potter. There isn't anything particularly geeky or special about his name; the "R" and the "A" are just transposed. This does, however, have some interesting implications given Draco Malfoy's dark story arc in the Potter series. "Mouso" is meant to imply a computer mouse or, more properly, a miss-click of a mouse in the same vein as a "typo" on a keyboard.