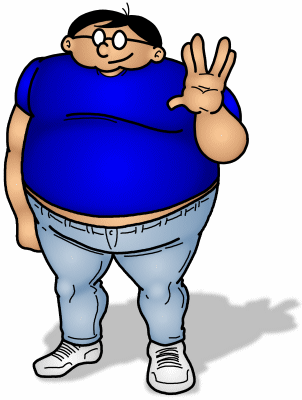 He's annoying. He's a slob. He's a total jerk. And did we mention he's annoying? He's the nerdy fanboy everyone loves to hate, but he keeps coming back with those blasted redeeming qualities that makes you feel bad about hating him. Then he does something annoying again to make you wonder where those redeeming qualities went.

Yep, you guessed it. We're talking about Dexter.

Dexter was a bit of an accident. He started as just a one-shot joke in the middle of the Code-A-Holics Anonymous story line, but for some reason I just kept coming up with reasons to use him. This pudgy, nerd-ish fan-boy is obsessed with science fiction, so much so that he once dreamed of joining the crew of Jurassic Park, until he realized it was just a movie. The only thing stronger to him than the pull of knowing every bit of Star Trek trivia is his attraction to Ki, which has brought him into direct confrontation with Nick on several occasions. While he acknowledges that Nick won that war, he'd be happy to comfort Ki the instant Nick might mysteriously vanish.

He played a pivotal role in the Nerdvana saga and even managed to take over the strip one April Fools' week. His shining moments, however, include helping Nick save some stranded kids during "Special Delivery" (then saving Nick himself), and helping the U.G.A. combat C.R.U.D.E. at the Battle of Manhattan (see Surreptitious Machinations, Chapter 8: Wars and Confrontations). Behind the Babylon 5 models and Star Wars figurines, Dexter actually does have a big heart that's usually in the right place. He just has that habit of being... so... irritating to be around.

Dexter is notorious for his poor dating habits. Although he often woos the ladies on the first date by being a perfect gentleman, he quickly deteriorates to a possessive freak who doesn't know when to leave a girl alone (which Ki quickly found out). He also briefly dated Fooker's girlfriend, Sharon, but that relationship undoubtedly ended rather quickly. His memory of that relationship was erased by Fooker when the U.G.A. wiped his memories after the Battle of Manhattan, but that was eventually undone by a lengthy conversation with Sharon. Sharon and Dexter are once again friends and Fooker generally tolerates his presence. The current object of Dex's affections is Patty, who is waffling between returning those affections and projectile vomiting in abject disgust.

Dexter was a contractor, jumping from job to job depending on where he was needed. (Or, as Fooker put it, he's a "disposable employee".) He began working with GPF Software to help rebuild their business following the events of Surreptitious Machinations, but at the end of 2003 he decided to accept Dwayne's offer to become a full-time employee. He currently serves as one of GPF's developers.

During To Thine Own Self..., Dexter joined Ki and their friends in traveling to an alternate universe to save Nick from the clutches of his alternate self, Emperor Nicholas the Puissant. Being the nerdish sci-fi geek he is, Dexter was thrilled at the possibility of learning about his "evil twin"... until he finally met him. Lord Dexter the Diabolical was indeed an evil, megalomaniacal despot, but a fallen one, having been dethroned by Emperor Nick and incarcerated in the dungeons of the Emperor's palace. Dexter became disillusioned with his preconceived image of his alternate self and instead turned that disenchantment into heroics to help save his companions. Dexter and his friends eventually returned to their home universe relatively unscathed, if a little unsettled by the experience of meeting their alternate selves.

Dexter is a rabid fan of Bog of Bloodbath, a MMORPG. He primarily plays on the "Spiritfiend" game server or "dominion", but also has a level 37 warrior on "Nethermoor".

Dexter's massive size recently became a huge liability. His doctor warned him that it was extremely probable that he would develop type II diabetes very soon and was at extreme risk for heart attack, kidney failure, and several other obesity-related conditions. Dexter quickly implemented an exercise and diet plan with Sharon's help. However, during a recent out-of-town trip to a technology expo, Dexter suffered a heart attack and was rushed to the hospital. Although his colleagues' quick actions saved him from permanent damage, it's obvious that drastic changes will be required to prevent his health issues from becoming worse.

During Scylla and Charybdis, Dexter, Patty, and Trish agreed to help Fred track down his mysterious "stalker", Socrates. Dex was present when Socrates was not only revealed to be a "slime mold" like Fred, but that both of them (and Persephone) were aliens. The entire group was knocked unconscious and taken aboard a Physaric ship, where they unexpectedly met Fooker's father, Colonel Lionel Barker. Dexter was present when the Colonel outlined his plan to navigate the human race through the impending Grey/Physaric War over the Earth. Following the story's climax, Dexter was among the human "survivors" and is currently helping his friends search for the "missing" Earth lost somewhere in the Cosmos.

In Sharon's dream world of Harry Barker, Dexter fills the role of Hagrid from Harry Potter. He is the keeper of the grounds at Hollerith's School of Phreaking and Hacking, the premiere educational institution for gifted hackers world wide. He was responsible for contacting young Harry and escorting him to the school for his first semester. He also created the web-crawling spider Arachnode, which Gnawthrylilees used to blackmail Dexter for the death of Mumbling Minnie, resulting in him being banned from hacking for the rest of his life. When a series of attacks threaten the safety of the school, Dexter is falsely accused and briefly imprisoned in Angband Prison until he is exonerated. During Harry's third year, Dexter is promoted to Professor of Digital Creatures.