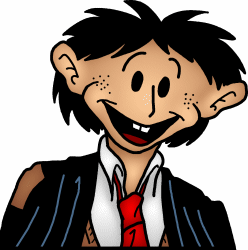 In Sharon's dream world of Harry Barker, Donald Measly is a scruffy, unkempt boy in the same class as Harry at Hollerith's School of Phreaking and Hacking. He has shaggy black hair, large ears, and a face fully of tiny freckles. His official school robes are obviously hand-me-downs, perhaps from an older sibling, and have been mended with obvious patches. His input device is a mouse, which is eventually revealed to be the murderer Petey Petagrue in disguise. He is in Torvalds Subnet along with Harry and is one of Harry's closest friends.

Naturally, Don is the analog of Ron Weasley from Harry Potter, but that's probably fairly obvious. Unfortunately, Jeff has been somewhat loose on the spelling of "Measly", sometimes spelling it with an extra "E" ("Measley") and sometimes without.