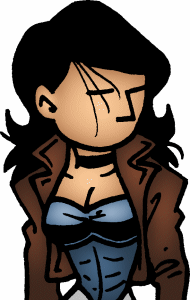 Distinguishing Characteristics: Often has loose bangs over her face

Duchess Ki Oshiro is the alternate universe counterpart of Ki Oshiro Wellington. She is physically identical to our Ki in every way, except she wears her hair in a much longer, voluminous style. At the beginning of the events of To Thine Own Self..., Oshiro is the Duchess of Europe and consort of Emperor Nicholas the Puissant in the "negaverse" under the Emperor's ruthless, totalitarian dictatorship.

The Duchess is far more cruel than her counterpart from our universe. We have been led to believe that in a situation similar to one that happened in Ki's past, the girl who eventually became the Duchess shoved her own brother down a flight of stairs in a fit of jealousy, mentally crippling the boy from the blunt trauma. Despite this, Oshiro is perhaps more like her counterpart than most "negaverse" denizens. When faced with the contrast between her Nick and ours, she is obviously conflicted. When our Ki states she is willing to die to save her Nick, the Duchess seems to have difficulty making the same claim. It is this moral inner conflict that defines the Duchess and which ultimately results in her downfall.

Oshiro was instrumental in the Emperor's rise to power. It was the pair of them who initially orchestrated the economic overthrow of the world's financial markets that gave Nick Wellington control. However, since the fledgling emperor wouldn't "share power", he appointed her as Duchess of Europe. She was his girlfriend before their ascension and she remained his consort after he became Emperor. Posing as our Ki, the Duchess kidnapped Nick and drew him into the Emperor's MUTEX to interrogate him about how his MUTEX and Velociraptor worked.

During the climactic battle where the Imperials and rebels join forces against the alien invaders, the Emperor turns the tables on Nick and pulls a laser welder on him as a weapon, intending to slip into the MUTEX and use it to escape to another universe. The Duchess, frustrated by the Emperor's repeated dismissal and devaluation of her, finally decides to betray him as well, picking up a large wrench to attack him. The Emperor spots her advance in a reflection and shoots her with the laser welder, critically injuring her. As the two Nicks wrestle for control, our Ki watches helplessly as the Duchess fades and eventually dies.