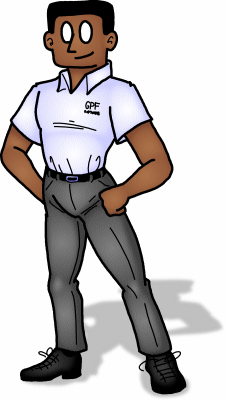 Dwayne Duncan is the founder, president, and lead software engineer for GPF Software. He is a tall, well-built, handsome African-American man of high intelligence and strong moral character. He is full of enthusiasm for the company and is the primary motivational force for anything that gets done. He's also the sanest one of the lot, and that has to drive him nuts.

I really feel for this guy. Poor Dwayne has to face this group of loonies every weekday, 9 to 5, and the fate of his life's dream is in their hands. That has to take it's toll on a guy. But Dwayne is strong and confident and (especially) patient. I really admire that in him, and that's why he's so important to the strip. If it weren't for Dwayne, the others would simply be coding in some small room with little light for hours on end. Here, at least, they can code in a small room with little light for hours on end, and it has a purpose.

Dwayne is, without question, the anchor to reality in the strip. While everyone else is being abducted by aliens or bouncing around through time, Dwayne seems to stay firmly planted in the present and oblivious to the more exotic story lines of the strip. While this has left him out of some of the wilder stories, I think it suits him best. Personally, I think that if he knew everything that was going on with his employees, he'd probably blow a few fuses.

Until recently, Dwayne was the only member of the core cast who was married. He and his beautiful wife Nicole have one daughter, Sydney, who is sure to keep our favorite company president busy for the next eighteen or so years....

During Surreptitious Machinations, Dwayne became an unwilling pawn to the manipulations of Trudy's future self. Trudy manipulated the company's clients to drive off business and put the company in financial trouble, then burned down the building to frame Dwayne for insurance fraud. Although he spent a brief time in prison, a fortunate bus accident freed him and Fooker to work to clear their names. In the end, Dwayne helped the U.G.A. defeat the sinister C.R.U.D.E., his name was cleared, and he rebuilt GPF Software into a bigger, better company than it was before.

Dwayne spent the majority of To Thine Own Self... in the safety of his home universe while his employees rushed off to free Nick from the clutches of his alternate self, Emperor Nicholas the Puissant. During their travels, however, the gang encountered Dwayne's alternate, Governor Duncan, lieutenant to the Emperor and governor of the province of Asia. Upon their return, it was Dwayne that volunteered to hire Trudy's "alternate self" to help her acclimate to her new surroundings, not realizing he was rehiring the same woman who destroyed his company just a few years before.

Dwayne had only a minor role in Scylla and Charybdis, primarily handing out assignments in the story's first chapter. After the dramatic climax, it is assumed that Dwayne and his family are still on Earth, frozen in time and lost in an unknown universe.

In Sharon's dream world of Harry Barker, Dwayne fills the role of Remus Lupin from Harry Potter. He first appeared on the train to Hollerith's where he saved Harry and his friends from a debugger searching for escaped murderer "Serious" Nick. He then assumed the post of Defense Against the Dark Arts professor, where he took Harry under his wing and mentored him, helping the boy learn to protect himself against the debuggers, which seemed obsessed with him. Dwayne revealed that he was a good friend of Harry's parents and eagerly shared what he knew about them. Harry later learned that Dwayne was also a friend of "Serious" Nick, and that Dwayne, Nick, his father, and Petey Petagrue were the creators of the Hooligan's Hash, a tablet-like device that mapped every secret passage and movement within Hollerith's castle. Dwayne initially believed the official story that Nick had murdered Petagrue, and that Nick's escape from Angband Prison was an attempt to murder Harry and finish the work he started with betraying Harry's parents to Gnawthrylilees. However, when Harry informed Dwayne that he saw Petagrue's name on the Hooligan's Hash, Dwayne realized that Nick was not after Harry, but sought revenge against Petagrue for betraying the Barkers and framing him with murder. In the Spamming Shack, Dwayne, Nick, Petagrue, and Harry and his friends all confronted each other and the truth was revealed. Before Petagrue could be handed over to the authorities, Dwayne's dreaded secret was unveiled; he was a Beowulf, a hacker corrupted by virtual reality and "cursed" to become an uncontrollable beast. Nick transformed into the Grue to buy the children a chance to escape until a mysterious howl drew the monster's attention. Later, when Harry and Harmony used a GOTO function to travel back in time and rescue Nick, Harmony reproduced the howl to distract Dwayne and rescue the others. Dwayne pursued them but was thwarted by Buckybits, who shorted out the VR and returned Dwayne to normal. Dwayne was eventually fired from his position at Hollerith's when news of his affliction reached the governing board, but before leaving he returned the Hooligan's Hash to Harry, which he had confiscated earlier.

When he was first introduced, Chuck was often confused with Dwayne by many readers, primarily because they were both African American males with similar appearances. Technically, Chuck's skin tone is darker than Dwayne's in both gray scale and color strips, and his head is rectangular while Dwayne's is square. However, these differences were apparently too subtle, giving rise to a number of readers thinking Trudy brainwashed Dwayne instead of Chuck. This was the primary motivation for having Chuck shave his head so the two would be easier to tell apart.