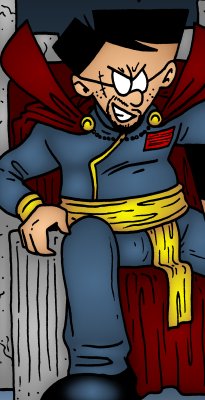 Status: Alive and aboard a Physaric vessel somewhere in the Milky Way galaxy

Nicholas the Puissant is the alternate universe counterpart of Nick Wellington. He is physically identical to Nick in every way, with the exception of a goatee and a scar on his right cheek. At the beginning of the events of To Thine Own Self..., Nicholas is the ruthless, totalitarian dictator who rules the Earth of the "Negaverse" with an iron fist.

"Nega-Nick", as many Faulties have dubbed him, is in many ways the mirror image of our lovable software engineer: he is cold, heartless, abusive, and flippant with the lives of others. In his rise to power, he thought nothing of orchestrating the deaths of countless enemies and innocents, although there is no evidence he personally murdered anyone. Even those he may have shared an intimate relationship with, such as Duchess Ki Oshiro, were nothing more than pawns in his constant bid for more power, and every pawn was considered expendable.

Like "Posi-Nick", the Emperor possessed many technological talents. He too is gifted with the Inventor's Gene and created his own version of the MUTEX as a torture device. However, it appears that he was not as gifted as Nick is, as he was never able to reproduce the Velociraptor power source and thus could never transport organic matter between universes. It was this limitation combined with his discovery of the GPF universe and Nick's inventions that led the Emperor to kidnap his counterpart and force him to replicate the interdimensional transport, although with little success.

For some time, the exact fate of the Emperor was unknown. While his palace crumbled around him in the midst of a brutal alien assault, he attempted to escape his universe via the MUTEX. Nick, however, removed the guidance circuit right before it was activated, causing the Emperor to dematerialize with no set destination. His whereabouts were then largely unknown; he was thought to have materialized into some random other universe, or he may have simply dematerialized into nothingness. As far as our heroes were concerned, however, he was dead... or at least no longer a threat.

We eventually learned that he was flung into our dimension at some unknown time and location. He spent several of the years after his arrival disguised as a janitor at a small hospital, building a new life for himself. What his motivations or plans were during this time are currently unknown. However, when Nick and Trudy were brought to his hospital, his fortunes quickly changed. Seeing an opportunity for his "ticket out o' here", he hatched an ill-conceived plan to murder Nick and take his place. This plan was thwarted when he was taken over by the very alien invaders he once fought in his home dimension. Before the aliens could remove the real Nick from the hospital to dissect him, he was beamed away by an unknown force. Taking the setback in stride, the invaders put "Nega-Nick" in Nick's place, replicating his injuries and feigning amnesia so he could complete their mysterious plans. For the next few years, the Emperor turned alien spy infiltrated GPF Software with unknown plans for his unsuspecting "coworkers".

During his time as an alien "puppet", "Nega-Nick" and his symbiote/captor attempted to decipher the mysteries of Velociraptor. A stray energy jolt shocked the pair, throwing them against the opposite wall. In the process, the alien was fused into "Nega-Nick's" body. "Nega-Nick" regained primary control over himself, although the alien was able to assert occasional control when he became distracted. The alien also remained fully cognizant, quickly becoming a sarcastic inner commentator on the Emperor's haphazard machinations. An unforeseen consequence of this merger was the creation of a touch-based telepathic "link" that allowed the pair to read the thoughts of any human "Nega-Nick" physically came in contact with. The only known recipient of this "link" was Trudy, whom the Emperor assumed was the Trudy from his universe. Seeking some way to enact revenge against her, "Nega-Nick" pressured Trudy to experiment with the "link" as a means of recovering their missing memories. While Trudy agreed to meet with him during amnesia-busting sessions, she actively resisted using the "link" because she feared the intimacy and loss of control she felt while using it.

During Scylla and Charybdis, Dwayne sent "Nega-Nick" and Trudy on an overnight trip to meet with a customer. During the trip, "Nega-Nick" repeatedly attempted to trigger the "link" "accidentally", ultimately succeeding in creating an imaginary sequence where two started having sex. When the link was broken, Trudy shoved him out of the way, slammed the door between them, and struggled to regain her composure. The incident bothered her for most of the next day, forcing her to ultimately confront him that evening. During the ensuing argument, "Nega-Nick" manipulated Trudy into believing he still had feelings for her and that Ki had been cold and distant with him, implying that their marriage was falling apart. Still angry with him and with herself, Trudy impulsively threw him on the bed and the two had sex. During the afterglow, "Nega-Nick's" alien copilot surreptitiously contacted its superiors telepathically, calling in an alien-controlled S.W.A.T. force to raid the hotel room. "Nega-Nick" was able to "kill" the alien's remaining consciousness just before being rendered unconscious by a S.W.A.T. agent's rifle butt.

Aboard the alien ship, "Nega-Nick" was kept under heavy sedation and was slated to be dissected to ascertain how he had "reasserted" himself. The sedation proved ineffective, and he quickly killed two of the aliens, apparently now immune to their touch. When he confronted a third alien, it instinctively began mimicking his movements. Strangely, several other aliens started converging on his location, not in a threatening manner, but almost with an insatiable curiosity.

During the story's epilogue, we saw that "Nega-Nick" had evaded the Grey and Physaric searches and remained hidden aboard one of the Physaric ships, submerged in a small "pool" of Physarics. "Nega-Nick" was somehow able to control the aliens and had "assimilated" up to 34% of its crew. When the epilogue ended, his new "army" was headed toward the ship's syncytium with the intent of taking control of the entire ship... and perhaps beyond....

Many fans took great delight in counting off how many rules on the Evil Overlord List the Emperor consistently broke. This was later lampshaded in this strip.