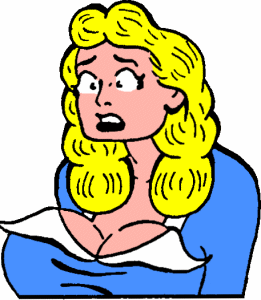 Flavoura Filigree is the fiercely loyal, albeit scatterbrained personal Assistant of media magnate, H.R. Beck III. Filigree holds the record for longevity at this position—all her predecessors having been "eliminated" after merely hours in Beck's employ. With courage and great inner strength, Filigree alone stands between the tyrannical Beck and the cowering minions who shudder at the very sound of his voice.

Filigree is first introduced to the GPF universe when Prof. Wisebottom accidentally reveals to Nick and Ki that he received help designing his time machine when he happened to observe a "working model". He then recounts the tale of meeting Filigree and Emily von Schnagel, time travelers from the year 2002. Filigree and von Schnagel were sent back in time to 1945 by von Schnagel's husband, Leo, in order to save their lives from events occurring in 2002. In an attempt to travel back to 2002 but before the point where they left, the pair tweak the settings of their time craft and end up traveling forward only three years to 1948, landing in an unspecified location in New Mexico. Their time machine is damaged by United States Army personnel and the pair narrowly escape, fearing they are now trapped in the past with little hope of returning.

When they procure lodging at a local boarding house, they run into a teenage Otto Wisebottom. Already beginning to manifest the Inventor's Gene, Wisebottom offers to help the women return to their own time by repairing their craft. He has already begun work on designing his own time machine, but for now it is purely theoretical. He is able to compare the two designs to see where both have apparently failed, combining both to repair the machine. Wisebottom returns the women to 2003, after which their remaining adventures are forever a mystery to him. By coincidence, the time machine (which resembles a large metallic saucer) is mistaken by locals in the small town of Roswell to be an alien space craft and the legend of the Roswell aliens is born.