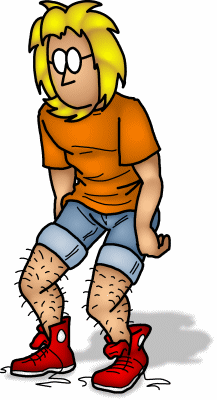 Jason—or as he prefers to be called, "Fooker"—is GPF Software's lead system administrator and occasional programmer. He is also a total nut case and should be dealt with cautiously. This tall, scruffy, sloppy man with poor posture and hygiene and a severe allergy to long pants is definitely a college kid who refused to grow up.

If there's a weirdness element in this strip, Fooker epitomizes it. If someone codes best naked, it's Fooker. If someone has a slime mold that pays half his rent, it's Fooker. His apartment has been condemned by the EPA and the back seat of his car is one big stereo speaker. (It never gets used for anything else.) Fooker is one strange puppy, and always makes a lasting impression.

Fooker also has quite a way with the ladies, as well. Yes, no one can turn a woman off at fifty paces better than Fooker (although there are notable exceptions). Neither is there anyone who is as perpetually turned on as he. No human with two X chromosomes is safe when he is around. He's been shot down so many times, he brushes it off with ease.

One disturbing revelation that has surfaced is that Fooker was actually a secret agent. As a member of the highly secretive, highly elite Undisclosed Government Agency (U.G.A.) and using the moniker of "James Baud," Fooker occasionally traveled the world combating such villains as Moldfinger, Doctor Not, and the rest of C.R.U.D.E. In fact, it was his connections with the U.G.A. that helped complicate matters when he was put on trial for murder (really committed by the time traveling robot called the Fookinator), and later helped bring an end to Trudy's Surreptitious Machinations for the rest of the crew.

Unfortunately, with his cover seriously compromised, there was little for Fooker to do but go underground and work full time for the U.G.A., leaving his friends behind. He became very active in his secret agent activities, briefly serving in the US invasion of Iraq in 2003 as well as hunting down the remnants of C.R.U.D.E., such as the sinister Doctor Nefarious and diabolical Dr. Not. Eventually, however, his homesickness got the better of him, and with the help of his superior Amadeus and his estranged brother Justin, he concocted a twisted scheme to have Justin take his place as James Baud while he returned back to "real" world. Fooker is now back in the company of his friends. There was a brief concern for his future employment as Sharon held his former position at GPF Software. But after a brief stint as an independent contractor, Fooker is back on the job at the newly expanded GPF, taking the lead sys admin role for the company's newest projects.

During To Thine Own Self..., Fooker was instrumental in helping Ki rescue her husband-to-be Nick from Nick's sinister alternate universe self, Emperor Nicholas the Puissant. With the help of the U.G.A., they traveled to the other universe via the MUTEX. Like all members of the cast, Fooker eventually came face-to-face with the specter of his darker, inner self, which in his case took the guise of General Barker, the Emperor's top military adviser. Fooker and his friends eventually returned to their home universe relatively unscathed, if a little unsettled by the experience of meeting their alternate selves.

Fooker's family tree is ever so slowly being revealed. We know that his mother has passed away, and that his mysterious father is actually one of the founders of the U.G.A. His brother, Justin, was originally tapped to be a U.G.A. candidate, but Fooker accidentally stumbled into the position.

Fooker played a minor role in Scylla and Charybdis, leading Sharon and Justin as they are beamed aboard a Grey survey ship. He was present when they discovered that Nick had been aboard the vessel for over a month, as well as being witness to the climactic showdown between Nick, the Grand Protuberance, and Colonel Lionel Barker. The story ended with his long-awaited wedding to Sharon with the Great Skaboola officiating. (Whether their "marriage" will hold up in an Earth court of law remains to be seen.)

In Sharon's dream world of Harry Barker, Fooker fills the role of James Potter from Harry Potter. He is the father of young Harry, a gifted hacker who knows little about his true past. Sharon is Harry's mother. Both are deceased, murdered by the notorious Gnawthrylilees, leaving poor Harry to live with his aunt Trudy and her husband Trent. He is one of the creators of the Hooligan's Hash, a tablet-like device that maps every secret passage and movement within Hollerith's castle.

Contrary to some popular belief, the nickname "Fooker" does not come from a certain piece of profanity (international or otherwise). Actually, it just sounded kewl, but, for those that insist... it's a play on his name. Playing off the common programming metasyntactic variables foo and bar and his last name being Barker... you fill in the blanks. Several jokes have been made throughout the Archive giving variations of this origin. He pulls his wardrobe from a guy I knew in college, and his personality and other quirks from virtually every geek I've ever known (including myself).

Consequentially, there is also some confusion on how to pronounce "Fooker," similar to the confusion over Ki's name. Some people pronounce it with the long double-"O" sound ("root"), while others use the short double-"O" sound ("hook"). Officially, it's the first one... think about the derivation above ("foo and bar") and it seems to fit better. While I'm not entirely opposed to the other pronunciation, it lends itself to easily to... um... misinterpretation. :)