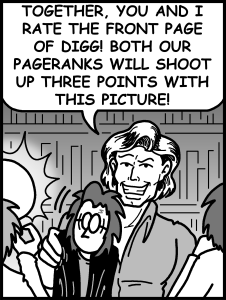 First Appearance: Harry Barker and the Chatroom of Enigmas (November 24, 2010)

In Sharon's dream world of Harry Barker, Gedanken Deadlock is a rather famous hacker and author, and at one point the Defense Against the Black Arts professor at Hollerith's School of Phreaking and Hacking. He is a handsome man and is often fawned over by the ladies; however, he is also vain, overconfident, and self-obsessed. His professed accomplishments are numerous and varied, but it is eventually revealed that most of his claims are completely false. If there is one thing Deadlock is exceptional at, it is deleting and falsifying data. Most of his "accomplishments" were actually performed by other, more gifted hackers, but Deadlock's ability to tamper with records allowed him to claim many of these for his own, leaving no proof of their originators.

During "Harry Barker and the Chatroom of Enigmas", Deadlock first appeared at Flowcharts & Blogs in Bogon Alley, promoting his latest book. Spotting Harry Barker in the crowd, he pulled the boy to the front, claiming that together they would "rate the front page of Digg!" Deadlock later took the post of Defense Against the Black Arts professor at Hollerith's and helped resurrect the Hollerith's hackers dueling club. In a demonstration match, Deadlock was soundly defeated by Scott Sysape while he was busy pontificating to the students.

After the faculty discovered that Jenny Measly had been taken to the Chat Room of Enigmas, Patty McDongle suggested that Deadlock use his legendary skills to rescue her. Harry and Don followed him, only to discover that he was secretly preparing the flee the grounds. Deadlock revealed to the boys that he was a fraud, but claimed that they had no proof of this to take back to the rest of the faculty. After the boys threatened to use Don's broken mouse to erase his latest manuscript, Deadlock reluctantly agreed to assist them. The trio proceeded to the girls' bathroom where the entrance to the Chat Room was located. Deadlock used the boys' distraction to swipe Don's mouse and attempt to escape. However, when he activated the broken mouse, it backfired, throwing him against the ceiling and causing a cave-in that separated Harry from Don and Deadlock. After the story's climax, it was revealed that Deadlock had accidentally wiped most of his own memories and had no recollection of anything that transpired.

Deadlock is the analog of Gilderoy Lockhart from Harry Potter. His name is derived from two separate Jargon File entries: "gedanken", "ungrounded; impractical; not well-thought-out"; and "deadlock", "a situation wherein two or more processes are unable to proceed because each is waiting for one of the others to do something."