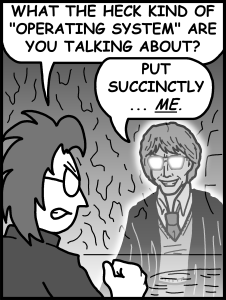 First Appearance (as "Billy"): Harry Barker and the Chatroom of Enigmas (January 7, 2011)

In Sharon's dream world of Harry Barker, Gnawthrylilees is a mysterious and powerful Black Hat hacker. We know very little about him, although we do know that he murdered Harry's parents, Jason and Sharon Barker and attempted to murder Harry as well when the boy was still an infant, giving Harry his distinctive backwards "Z" scar. (He hit the infant Harry in the head with his keyboard.) Eventually, we discover that his initials are "WHG" and that he used to go by the name "Billy", although his full name has yet to be revealed. It is assumed that "Gnawthrylilees" is an anagram of his full name, chosen to inspire both fear and awe.

Despite the fact that most hackers believe he is deceased, his name is so feared to this day that it is rarely if ever spoken, and he is often referred to as "You Know Who" or "He Who Shall Not Be Named" (the latter, ironically, being a title originally given to Fooker by the Brotherhood of the Twisted Pair). It was eventually discovered, however, that the Dark Lord was very much alive and that Professor Quux acted as his agent during the incident with the Napier's Bones. While not physically present, Gnawthrylilees gave Quux instructions via an elaborate array of surveillance equipment hidden under Quux's turban.

During the incident concerning the Chat Room of Enigmas, Harry and his friends learned that "Billy" was once a normal, perhaps well respected hacker and familiar with both Tim Dumpingcore and Dexter Smith. He used Arachnode to blackmail Dexter for the death of Mumbling Minnie, resulting in Dexter being banned from hacking for the rest of his life. However, as the "Sysop of Mitnick", "Billy" was able to reboot the Chat Room of Enigmas, unleashing the "monster" inside, resulting in Minnie's death. When Luser Mouso placed a DVD containing a "data ghost" of "Billy's" younger self inside one of Jenny Measly's books, the ghost overwhelmed and frightened the girl, forcing her to do his bidding and reboot the Chat Room once again. Harry confronted the ghost of "Billy" within the Chat Room, eventually vanquishing both him and his "monster" and destroying the disc that contained his image.

Gnawthrylilees is the analog of Voldemort from Harry Potter.