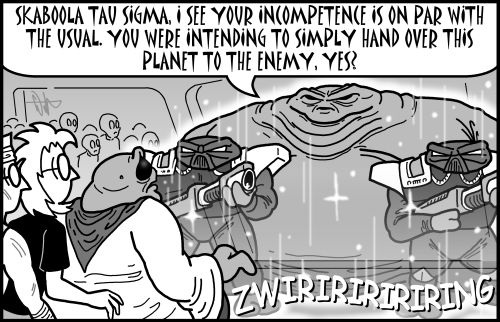 Distinguishing Characteristics: Extremely large and fat Grey; does not walk, only moves from place to place via teleporter

Protuberance Omicron, also known as "the Grand Protuberance", is a high-ranking member of the Grey hierarchy. He is Skaboola Tau Sigma's immediate supervisor and reports directly to the Supreme Fu himself. He is a massive being of the same species as the typical drones but exponentially larger, dwarfing even the Skaboolas. He is so massive that he rarely if ever moves under his own power, and cannot even use the hovering chairs the Skaboolas use. Rather, he is teleported from one location to another and remains stationary until his presence is required elsewhere, where he teleports once again.

The Protuberance is cold, calculating, and cunning, displaying a terse command style uncommon among the somewhat bumbling drones under his command. He is not easily deceived, paying close attention to the minutia of conversations. He rapidly grows impatient when he feels his time has been wasted, and his abruptness combined with his imposing stature rapidly garners fearful respect.

It is currently unknown whether or not the Protuberance has telepathic control over the drones and Skaboolas under his command, as the Skaboolas do over their drones.

During Scylla and Charybdis, when the Physaric threat to Earth was identified, the Grey research vessel under the command of Skaboola Tau Sigma notified their central command, which immediately dispatched the Seventh Fleet. The Grand Protuberance himself assumed command and, upon his arrival, immediately berated Tau Sigma for his incompetence. After being apprised of the situation by Fooker, the Protuberance reluctantly agreed to negotiations between the three parties (the humans of Earth, the Greys, and the Physarics) orchestrated by Nick. When Colonel Lionel Barker accelerated his plan with the Physarics and Nick thwarted them, the Protuberance used the distraction to initiate a counterattack. With few options left, Nick made the risky move of hiding the Earth in another universe using the MUTEX/Velociraptor interdimensional transport, tricking both the Greys and the Physarics into believing he had destroyed the planet. Before leaving the Solar System, the Protuberance confided in Nick that he was aware of the ruse, but couldn't figure out how he accomplished it. When Nick refused to reveal his secret, the Protuberance issued an ominous warning before leaving with the Seventh Fleet. The Protuberance left Skaboola Tau Sigma's ship in the Solar System to assist the humans in their "search" to recover the "lost" planet, likely in part to learn how Nick was able to wield such awesome power.