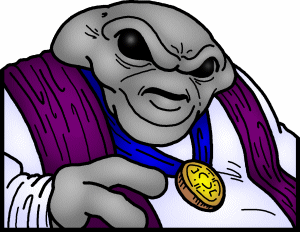 Distinguishing Characteristics: Larger and fatter than most Grey drones; does not walk, but rides around in hovering chair

Skaboola Tau Sigma, also known more casually as "the Great Skaboola", is the leader or "captain" of the Grey mothership that has most frequently visited and studied the planet Earth. Unlike the rest of his kind, he is large and fat, dwarfing the carbon-copy drones in both height and girth. He rarely (if ever) moves under his own power and instead travels by means of a levitating chair that barely contains him.

The Skaboola controls the drones via some means of telepathy, the exact nature of which is unknown. Thus, the Skaboola is the only member of the Greys who typically expresses independent thought. It should be noted, however, that individual drones can act on their own in the absence of the Skaboola's influence.

The Skaboola is corrupt and greedy, and is easily bribed. His primary weakness is an obsession with cheese, for which he acquired a taste for but could never reproduce. Although he abducted Fooker and Trudy to observe human mating habits, he eventually traded their freedom and a vast quantity of weapons for all the cheese his spaceship could carry.

In the alternate universe of Emperor Nicholas the Puissant, the Emperor subjugated and enslaved the Greys by drugging the Skaboola and using his telepathic influence over the drones to force them to do his bidding.

During Scylla and Charybdis, we learned that the Skaboola was not the only Skaboola, but one of series of advanced clones similar to the typical drones but specifically bred for leadership duties. His designation is "Tau Sigma". We also learned that he was not the top of the Grey hierarchy, as he seems to report directly to the Grand Protuberance. Whether the Protuberance has telepathic control over the Skaboola in a similar fashion to the Skaboola controlling the drones has not been confirmed. After Scylla and Charybdis, the Protuberance ordered the Skaboola's ship to remain in Earth's solar system to aid the humans in their search for the missing Earth.