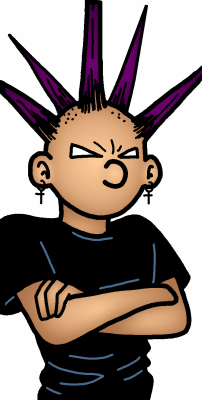 Greg is currently the "Zero One" of one of two factions of the Brotherhood of the Twisted Pair. During the events of "Sister Sharon", Greg was "One One", or third in command under Scott and Tim. When Scott proposed the possibility that Sharon may be "the One", Greg revolted and called for a vote of no confidence in Scott's leadership. The vote was never cast because of a RIAA and FBI raid on the Brotherhood's warehouse, but the damage had already been done.

After the raid, many of the Brothers were scattered and completely disassociated with the Brotherhood. However, a schism formed between those who remained, with a few following Scott but the majority following Greg. Both factions continue to search for "the One", with the primary distinction being that Greg's faction completely discounts Fooker and Sharon as candidates while their offspring is the prime candidate for Scott's faction.

Before the split, Greg organized a Quake deathmatch against Fooker in revenge for his "sins" against the Brotherhood. Fooker decimated the Brothers who far outnumbered him, but the matched ended in a tie because Fred, who was on Fooker's team, got slime gummed up in his mouse and was repeatedly killed.