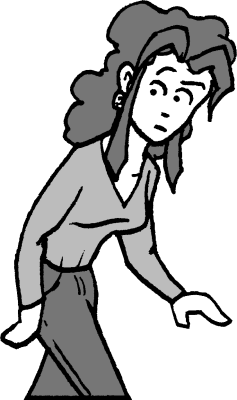 Weight: Unknown (and we're not going to ask)

Distinguishing Characteristics: Usually wears thick glasses and is practically blind without them

Gwynn is one of the original core cast members of Pete Abrams' wildly popular Sluggy Freelance. She has had a rocky, on-again off-again relationship with her fellow cast members, ranging at times from cordial and friendly to antagonistic. Although she is sardonic, selfish, often violent, and will manipulate people at the drop of a hat, she has proven her loyalty to her friends several times, usually in periods of crisis. She is a practitioner of black magic with heavy ties to both the Book of E-Ville and the demon K'Z'K, having being possessed and manipulated by both.

Gwynn first appears in the GPF universe when Trudy, on the run from the U.G.A., C.R.U.D.E., and virtually every government in the world, crashes at the Kesandru House in order to find out the current location of her parents. It is here that we learn that Gwynn is Trudy's cousin, although exactly what combination of relatives forms this link is uncertain. (Pete Abrams has provided very little about Gwynn's family or history within Sluggy Freelance itself, and the exact relationship between the cousins is not elaborated upon within GPF.) Despite her sometimes questionable moral compass, Trudy refers to Gwynn as "the white sheep of the family" and trusts her over any of her other relatives because she is "too much of a 'goody goody' to be that mercenary" as to turn her in. Trudy coerces a stash of money and the location of her parents out of Gwynn and leaves, but not without a touch of fashion criticism.

Characters from Sluggy Freelance are © Copyright 1997-2017 Pete Abrams and are used within the strip and this wiki with permission. This article uses material from the "Gwynn" article on the Niftypedia wiki at Wikia, which is licensed under the Creative Commons Attribution-Share Alike License.