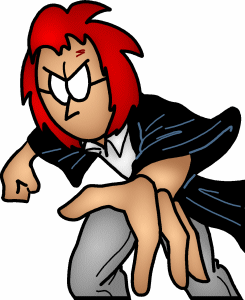 In Sharon's dream world, Harry is her and Fooker's son, apparently orphaned and living with his aunt Trudy, her husband Trent, and their son Travis. In this make-believe world, the Brotherhood of the Twisted Pair's predictions have undoubtedly come true and Harry is most likely to be "the One", the fabled geek messiah who will eventually lead the world into technological enlightenment. Harry, however, is unknowing of this fact, having lived a sheltered life largely free of technology thanks to his "luddie" aunt and uncle.

Harry is a naturally gifted hacker, although he is only just now becoming aware of this fact. His name has been on the roster for Hollerith's School of Phreaking and Hacking since before he was born. He is a natural typist and his chosen input device is a highly specialized keyboard. When sorted into his Subnet at Hollerith's, the Sorting Cat surprisingly asked his opinion on the matter (an apparently extremely rare occurrence) before placing him in Torvalds Subnet. Harry was quickly chosen by Patty McDongle to be Sniper on the Torvalds Quakish team after an impressive display of throwing accuracy.

Physically, Harry looks much like his father in appearance: thin, scrawny, and tall for his age, with a mane of unruly hair and thick glasses. His hair, however, is bright red much like his mother's. Harry has a distinctive scar on his forehead in the shape of a backwards letter Z. According to Dexter, he received this scar when a Black Hat hacker named Gnawthrylilees smacked him in the head with his keyboard when Harry was still an infant, shortly after Gnawthrylilees murdered his parents. Harry is highly intelligent and a bit sarcastic, but with a noble heart and a fierce sense of loyalty and justice.

Quite obviously, Harry is the analog of the title character of the Harry Potter series of books and films. Since "Barker" has a somewhat similar sound to "Potter", keeping the name "Harry" seemed an appropriate choice.

More generally, the Harry Barker series of parodies poke fun at both the world of Harry Potter and the realm of computers and technology in general. As such, "wizards" and "witches" become "hackers" and the ability to use magic transforms into skill at manipulating technology. Many of the magical creatures, objects, and characters from the Potter universe are "transliterated" using computer-related terms and puns, some of which are extremely obscure. The Jargon File (Wikipedia entry) heavily influenced the creation of this series and many of its puns. It is meant to represent one possible interpretation of the Brotherhood's search for "the One", which plays off of the Potter theme of Potter being the "Chosen One" to defeat his enemy, Voldemort. The Harry Barker series seems to be very controversial among Faulties; while many fans of both GPF and Potter have lauded the stories for their puns and humor, others have called the them too derivative, too straightforward, or simply not funny enough to be considered good parodies.