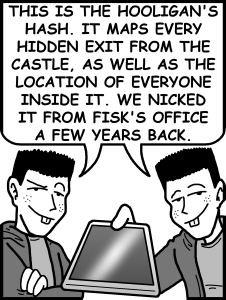 In Sharon's dream world of Harry Barker, the Hooligan's Hash is a tablet-like device that maps all passages and rooms in Hollerith's Castle, including secret passages that are otherwise hidden. It can also track the location of every living person in the castle, making it an invaluable tool to anyone wishing to perpetuate mischief.

The Hash was created by Jason Barker, Nick Wellington, Dwayne Duncan and Petey Petagrue during their attendance at Hollerith's. Although its activation sequence was not revealed, the device can be turned off by pressing the Home button and saying "Tomfoolery terminated!" In this state, any attempt to read the device will result in it insulting the reader.

Harry acquired the Hash from Fred and Barney Measly, Don's twin older brothers, who had "nicked" it from Fisk's office in a previous year and decided that Harry's "need is greater than ours". It was via the Hash that Harry discovered that Petagrue was still alive, which led to the climactic showdown in "Harry Barker and the Prisoner of Angband". When Dwayne discovered that Harry had the Hash, he warned the boy that it was extremely dangerous and that it could lead the "murderer" "Serious" Nick right to him. Dwayne then confiscated the Hash, placing it in a drawer. After Nick was exonerated and Dwayne fired from his post at Hollerith's, Dwayne returned the Hash to Harry.

The Hooligan's Hash is the analog of the Marauder's Map from Harry Potter. The device's name plays on the similarities and confusion between maps and hashes in computer science, which are different forms of associative arrays; substitute "hash" for "map", then add an alliterative substitute for "marauder" in "hooligan".