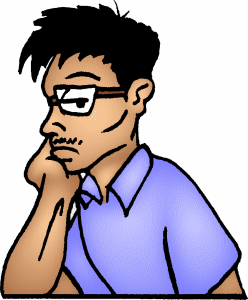 Known Aliases: Jeff, "The Cartoonist", "Our Dread Lord", "That creepy guy with the mustache who sweats a lot"

Marital Status: Married (believe it or not)

At the beginning of the Year Two story "Y2k: The Phantom Menace" (a highly original, topical saga that bears absolutely no resemblance to anything otherwise published around the same time), GPF uncharacteristically breaks the fourth wall with a week of self-referential strips. Angered at the prospect of "jumping on an overloaded bandwagon" with a story related to the Year 2000 problem, Nick revolts and vows to take matters to a higher power: the cartoonist himself. After trying unsuccessfully to call Jeff (who apparently screens his calls), Nick storms to his art desk and lays down his demands. After unceremoniously denying Nick's request, Jeff bluntly points out that Nick's tirade has done nothing to advance the plot or develop anyone's character. Disgusted both by this outcome and the fact that he's essentially been used for filler material, Nick resigns himself to a foul mood, which leads well into the main story's true beginning.

Yet who is this enigmatic character that controls the destiny of our geeky heroes? Why have we not seen him since? Is it because he has wisely decided that breaking the fourth wall is a horrendous cliche to be avoided in the future at all costs? Or is he still there, lurking behind each panel, weaving one surreptitious machination after another to torment the cast and its readers alike? And why is this paragraph composed entirely of questions? Is it meant to provoke thought and debate, and instill a greater sense of wonder? Or is it symptomatic of someone who is trying to pad this article with pointless words?

We'll have to leave that one up to you to decide....

Before anyone should accuse Jeff of narcissism in creating a Wiki entry about himself, the inclusion of this entry has been specifically requested numerous times by actual readers of the comic. No, really. We're not making that part up. We have the actual e-mails and Twitter tweets saved... somewhere....