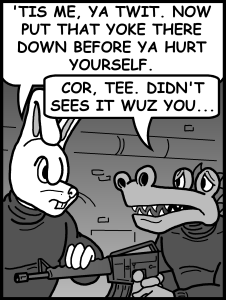 When Victor Brown sabotaged Velociraptor, he stranded Fooker, Sharon, Trudy, and Stewart Johnson in a parallel universe where they were all transformed into anthropomorphic "furry" animals. Before they had much time to adapt to the change, they were confronted by D.C. Smythe, a British SIS agent in search of a mysterious white rabbit. After the Gamester covertly informed Smythe that our heroes were trapped in his universe, Smythe was forced to "babysit" the quartet and reluctantly pulled them into his investigation.

Little is known about the mysterious figured known as "Joe T." Smythe and his partner Valerie Smith painted him as an Irish mercenary and international terrorist. He is also suspected to be a serial killer, although the agents have yet to elaborate on this claim. "Tee" is an expert in bladed weapons and a skilled brawler, and takes a particularly sadistic joy in tormenting his opponents. He is often paired with his dimwitted associate Al E. Gator, serving as the brains and cunning to Gator's raw muscle.

While he was the chief suspect in the suspicious "theNullBoyz" hacking incidents, both Smythe and Smith admitted that "Tee's" computer skills seemed insufficient to make him the mastermind behind the scheme. This turned out to be prophetic, as "Tee" was under the employ of the mysterious Doctor Shadow, a criminal mastermind with a distinctly technological slant. The group tracked down "Tee" to Shadow's underground lair where they were captured. After listening to Shadow's villainous monologue, the resourceful Fooker freed himself and the others, taking on "Tee" to give Smythe and Smith a chance to apprehend Shadow. Regrettably, Shadow and his henchmen got away, but not before Shadow's "shadowCoin" scheme was demolished.

First appearing in Jeff's original D.C. Smythe comics in 1985, Joe T. remains one of Smythe's oldest recurring villains. Originally envisioned as a petty thug, "Tee" quickly became known as an international terrorist in order to better fit the campy spy genre of the original comics. While "Tee" frequently operated independently in his earliest appearances, he quickly fell into the employ of a mysterious mastermind and thereafter settled into the role of henchman. Young pre-teen Jeff thought it was amusing to have a stereotypically docile rabbit transformed into a bloodthirsty killer.

Many of the D.C. Smythe characters, including Joe T., have been regular fodder for the Jeff's Sketchbook feature of GPF Premium.