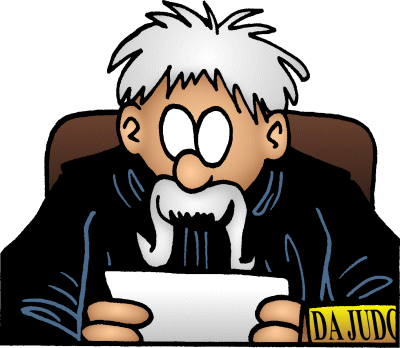 Apparently, there is no employee of the United States Department of Justice more long-suffering and put upon than "the Judge". His name has never been revealed, but his repeated run-ins with the GPF crew—and especially Fooker—have certainly earned him the early retirement he justly deserves, but apparently can never have.

The Judge appeared regularly in the updates of Help Desk over the years, where he was forced to deal with the convoluted machinations of Ubersoft on a routine basis. However, when Fooker "accidentally" released a "bug-free" version of Ubersoft's Nifty Doorways operating system to the Internet, the company sued GPF Software and the Judge was forced to arbitrate. While the case seemed clear cut, Trudy was able to eliminate Ubersoft's key evidence by using her microwave to trip the breaker in Fooker's apartment and crash his hard drive. With no evidence, Ubersoft was forced to drop their case.

A year later, the Judge was called in to preside over a murder case when the original judge injured her back in a skiing accident. It wasn't until he approached the courtroom that he realized the defendant was Jason Barker. Despite the extremely strange and bizarre circumstances of the case, the Judge was able to navigate the jury through the unusual testimony and Fooker was found guilty of all charges.

It is unknown if the Judge ever heard about Fooker's later escape from prison and eventually acquittal. However, several years later, the two did bump into each other (literally) just before the Judge was set to preside over Fred and Trent's libel case. Despite the trial's rocky start (including the question of whether a human could sue a slime mold), the hapless Judge was able to maintain order until the jury sided with Fred. The Judge slapped Trent with a restraining order, opened a criminal investigation into Trent's activities, and promptly left the courtroom in search of a "stiff drink and a long vacation." His last known destination was Tahiti.

Characters from Help Desk are © Copyright 1996-2017 Christopher B. Wright and are used within the strip and this wiki with permission.