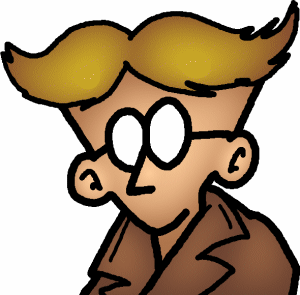 Very little is known about the meek and mysterious individual known only as "Knuth". He is a member of Greg's faction of the Brotherhood of the Twisted Pair and thus far has only appeared and handful of times. He invented the code name "Mirage" for Nick during the Bog of Bloodbath incident after analyzing the MUTEX's excessive encrypted bandwidth consumption. He also traced the IP traffic of BoB hacker "Lord Catastro" back to Yoshi, leading to the teen's eventual induction into the Brotherhood.

"Knuth" is named after Donald Knuth, computer scientist and Professor Emeritus at Stanford University best known for his seminal multi-volume work The Art of Computer Programming. Although most characters in GPF with a triangular-shaped head are somehow related to Nick, there is no evidence yet to either confirm or deny any such connection.

Some fans have speculated that one of the silhouetted figures in the February 10, 2012 strip may be Knuth, based on both characters' distinctive wavy hair. So far, no evidence for or against this theory has appeared elsewhere in the Archive. However, if this connection is proven true, it may indicate that the alien invaders have infiltrated the Brotherhood.