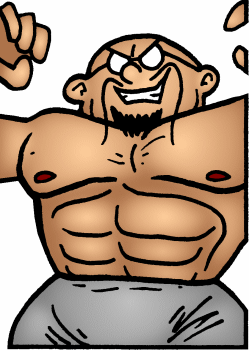 During To Thine Own Self..., as the rescue party searched the palace of Emperor Nicholas the Puissant looking for Nick, Dexter and Justin became separated from the main group when Dex discovered a prison cell with a shockingly familiar name: "Smith, Dexter J." Thrilled by the prospect that he too might have an "evil twin" ("My mirror universe counterpart is so bad the bad guys have to lock him up!"), Dexter attempted to open a viewing window to catch a peek. Instead, he accidentally opened the main door, allowing his counterpart to grab him in a bid to escape.

"Lord Dexter the Diabolical" was indeed the epitome of a dastardly evil overlord... or at least a grossly cartoonish caricature of one. He was garishly muscular, his head was shaved bald, he sported a goatee and Fu Manchu mustache, and his maniacal grin screamed of madness. Immediately upon learning of the prospect of alternate universes, he concluded that he must seize the Emperor's interdimensional transport to transcend "from evil mastermind to potential godhood". Even Dexter became so disillusioned with his fantasized "mirror self" that he begged Justin to "Shoot him. Now."

The impending arrival of the Emperor's stormtroopers forced the trio to form an impromptu alliance. Lord Dexter revealed that he had helped build the Emperor's palace and showed Dexter and Justin the way to the main reactor. He offered to help shut down the reactor to cut off the Emperor at his main weakness: his technology. The plan was interrupted by the arrival of Fooker and General Barker, who were locked in a fierce hand-to-hand battle. After the General and his goons were defeated, the group discovered that the General's spectacular death resulted in a reactor overload. At this point, Lord Dexter called for an end to their "alliance of convenience", deciding that running away to let Emperor Nick be blown to smithereens and moving in to take his place was far better than "being a hero" and getting himself killed. This mixture of cowardice and opportunistic greed disgusted Dexter, forcing him to pronounce that was was "mad at [himself]".

Lord Dexter's ultimate fate is currently unknown. While we do know he managed to escape from the palace before it exploded, he was also the first to see the invading alien fleet arrive. Whether or not he survived the invasion or the destruction of the palace is uncertain.