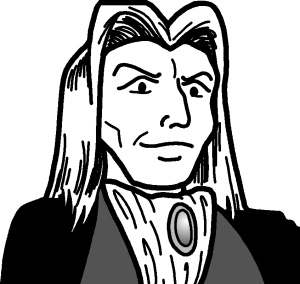 First Appearance: Harry Barker and the Chatroom of Enigmas (November 26, 2010)

In Sharon's dream world of Harry Barker, Luser Mouso is a wealthy black hat hacker who works for and is very influential in the Ministry of Hacking. He is also on the board of trustees for Hollerith's School of Phreaking and Hacking. He is tall and handsome, with chiseled features, high cheekbones, and starkly white hair. He has an air of superiority about him and routinely looks down upon hackers he sees as unimportant, especially "mundanes" and those who care for them. He has a personal disdain for Mr. Measly, Donald Measly's father, whom he works with at the Ministry. Luser is the father of Darco Mouso, Harry's school rival.

He prefers the pronunciation of "Loo-zair" for his name, but many hackers who do not like him prefer to call him "loser", although rarely to his face.

Luser first appeared in "Harry Barker and the Chatroom of Enigmas", where he ran into Harry, Harmony, and the Measlys at Flowcharts & Blogs in Bogon Alley. There, he surreptitiously slipped an optical disc into Jenny Measly's books. This disc was later revealed to contain a data ghost of a young version of Gnawthrylilees, who compelled Jenny to open the Chat Room of Enigmas. Luser was also the owner of Noddy the sprite until Harry tricked him into giving Noddy his own user ID, thus freeing Noddy from his servitude.

Luser is the analog of Lucius Malfoy from Harry Potter. His name is taken from this Jargon File entry.