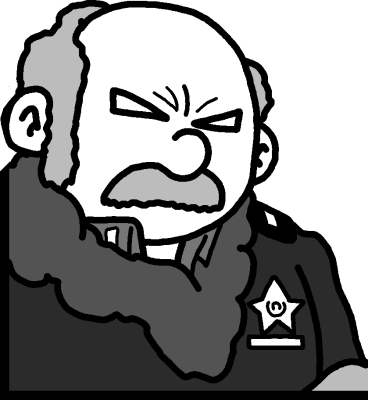 Lieutenant Mark Stone was a twenty-year veteran police officer serving upstate from GPF Software's office and not far from the former location of the Lakatos Pharmaceuticals resort. Stone's demeanor was gruff, blunt, and no-nonsense, perhaps indicative of a long and cynical career dealing with the lesser examples of human civility. That said, when we first encounter him he has already become a slave of the mysterious alien invaders infiltrating American society, so it's hard to tell how much of this personality belonged to him initially and how much was played up for the aliens' benefit.

Stone and his officers were sent to Western Regional Hospital to interrogate the only known survivors of the Lakatos resort arson, Nick and Trudy. Exasperated by Trudy's amnesia and Nick's coma, Stone pressed Dr. Melanie Granger for clues. The doctor, however, was unyielding, defending her patients' health. When U.G.A. Agent #18 arrived claiming to be a "federal agent" investigating the case, Stone arrested him, claiming a background check into the agent turned up no record of an agent by his name. He accused #18 of the Lakatos arson, handcuffed him, and locked him in a supply closet until an officer could be freed to take him to jail. Little did #18 realize that Stone was actually an alien spy and his brief imprisonment in the closet was actually a means to get him out of view so the aliens could claim a new slave....

As the newly converted #18 turned his attention to converting Granger, Stone turned his attention to Nick. Now too weak to be converted into a "puppet", Nick would be assassinated by Stone to eliminate him as a witness. Before he could kill Nick, Emperor Nicholas the Puissant arrived, seeking to kill his double himself. A brief struggle ensued resulting in the former emperor being converted to an alien slave and Stone receiving the lethal injection that was intended for Nick. As the emperor struggled in vain to resist conversion, both Stone and his alien captor died. The other aliens disposed of Stone's body in the hospital crematorium to hide his death.