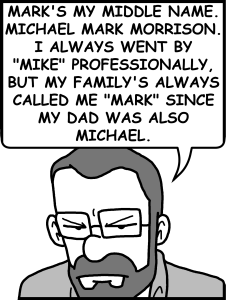 Michael Mark Morrison is a professional software developer and former employee of GPF Software. He is also Patty's mysterious ex-fiancé. Up until the events of "A Closet Full of Skeletons", most characters (and Faulties) assumed these were two separate people, given that "Mike" was the name given for the former GPFer and "Mark" was the name Patty used when speaking of him.

Mike was employed at GPF before both Nick and Ki joined the company. He was a friend of Fooker's and apparently left GPF due to moving to a new location. It is highly probable that Ki filled the position he vacated shortly after she graduated from college. He was the designer of Goodman Rubber's infamously cryptic inventory system, which Nick had to decipher and redesign as his first official project at GPF.

While it's been hinted several times that Patty is bad at intimate relationships, it wasn't until the final chapter of To Thine Own Self... that she opened up to Dexter about her engagement and failed wedding to Mark. According to her, on the day before their wedding Patty "did something very stupid. Naive, careless, cruel, and stupid." As a consequence, her fiancé broke off the engagement, leaving her standing at the altar for eight hours, humiliated and ashamed. This mysterious act has tainted every relationship she's had since, perhaps to the point where she subconsciously sabotages them before they reach a critical state. Although Dexter has shown an obvious interest in her, she has repeatedly pushed him away, keeping him at arm's length.

After the events of Scylla and Charybdis, Fooker and Patty ran into Mike/Mark while trying to recruit new volunteers for "away missions" in the search for the missing Earth. Patty and Mark's reunion was... understandably tense.

Mike/Mark's usually specific naming stems from what was originally a continuity mistake on my part. Initially, Mike (the former GPF employee) and Mark (Patty's ex) were meant to be to separate characters. Eventually, however, I decided it would be an amusing coincidence for them to be the same person. I was thrilled with that wonderful plot point up until I did some archive diving to verify things, only to rediscover the two distinct names. I struggled with how to reconcile this until I borrowed a page from a childhood friend's past. Most family and close friends call him by his middle name, but he often goes professionally by his first name. This seemed like a perfect compromise that didn't require retconning the archives.