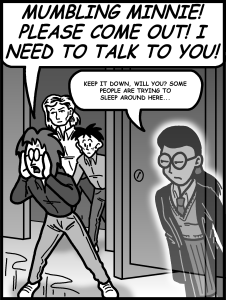 First Appearance: Harry Barker and the Chatroom of Enigmas (December 27, 2011)

In Sharon's dream world of Harry Barker, "Mumbling Minnie" is one of several "data ghosts" which "haunt" Hollerith's School of Phreaking and Hacking. As a "data ghost", she is technically not alive; she is, in truth, a virtual reality projection created by the eclectic artificial intelligences within Hollerith's vast computer network, based on old data never purged from system. However, the was at one time an actual girl named Minnie whose data became the basis for this ghostly avatar. Her story is tragic yet integral to the plot of "Harry Barker and the Chatroom of Enigmas".

We are first introduced to Minnie when Harry, Donald Measly, and Harmony Stranger use a deserted girls' bathroom to plot their scheme to sneak into the Mitnick Subnet common room in a bid to discover whether or not Darco Mouso is the "Sysop of Mitnick". Harmony explains that the bathroom is essentially abandoned due to Mumbling Minnie, whose unpleasant and depressing presence makes the facility difficult to use. Later, when Harry enters the virtual world of "Billy's" electronic diary, he witnesses Tim Dumpingcore discussing with "Billy" an incident where a girl has been killed, apparently frightened to death. Harry follows "Billy" and observes a confrontation between he and Dexter, during which "Billy" accuses Dexter of murdering the girl by means of a "monster" he created. When Dexter is sent to Angband Prison in an attempt to halt the attacks at the school, he leaves Harry and Don a clue to "do a packet trace on the spiders", leading them to the Forbidden Server Farm and Arachnode. While Arachnode exonerates Dexter from the attacks, it does not prove any useful clue as to who the true culprit is. Harry eventually figures out that the girl killed by the "monster" from the Chat Room of Enigmas must be Minnie and confirms this with her. Armed with information, Harry convinces her to reveal the location of the Chat Room, enabling Harry to confront "Billy" and his "monster" and free Jenny Measly.

Mumbling Minnie is the analog of Moaning Myrtle from Harry Potter.