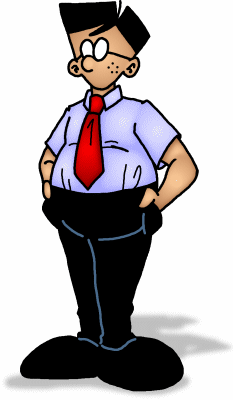 Nick is the primary character of the strip. He's a relatively short, quiet, and, well... nerdy kind of guy with quite an imagination. He enters the strip on his job interview with GPF Software, and it is through his eyes that we meet and view the rest of the crew. Nick is one of GPF's software engineers and its lead developer, often taking the role of technical lead for larger projects.

Nick is a former "shy nerd" who has become one with his geekiness and has embraced it openly. He loves science fiction and craves computers, and has little (i.e., no) experience with women. He is far more comfortable traversing a circular, doubly-linked list in a queue of B-trees than talking with the female species. But he is open and friendly and quite sociable... if you can keep the topic on his software. He has an affinity for gadgets and often refers to his PDA/smartphone as his "external brain".

Nick has a insatiable imagination, and is prone to daydreams and zany ideas. Expect him to occasionally slip into a fantasy sequence, turning a file search into a quest for hidden treasure. (He often places himself into other personae during such sequences, such as the infamous Oklahoma Nick, cyber-treasure hunter.) He has a dry, witty sense of humor, and occasionally pretends to plan to take over the world (a daydream that would eventually have ominous consequences).

Nick has a stable (albeit occasionally rocky) relationship with his friend, coworker, and now wife, Ki. However, we do know that Trudy took great pains to prevent this relationship from forming, to the point of sabotage. Her manipulations somehow continued to keep Nick on her side, while the rest of the cast viewed her as the resident evil. Nick's stubborn refusal to accept Trudy as the "resident evil" of the company had placed a strain on his relationship with Ki, until Trudy's twisted plots were finally revealed to him. Now that Trudy is out of the picture, the pair have overcome the last of their rough edges and settled in for a nice, healthy relationship. In fact, Nick and Ki eventually became engaged and recently tied the knot.

During Surreptitious Machinations, Nick became the key to Trudy's ultimate plan for world domination. Playing off his surfacing Inventor's Gene, Trudy planned to use his abilities to build a weapon by which she could conquer the world. However, through the determination and perseverance of his friends, Nick finally saw through Trudy's lies and deceptions and denounced her. With the rebuilding of GPF Software, Nick hopes to settle down and get back to his old programming stomping grounds... but we all know things are never quite normal around here, are they?

Nick's relationship with Trudy graphically demonstrates one of his more annoying personality traits: he always tries to see the best in people, sometimes to the point of naivety. However, shaken by Trudy's betrayal, he occasionally swings to the opposite extreme, which was best demonstrated by his skepticism of Trish.

To Thine Own Self... focused primarily on the events surround Nick and Ki's wedding, as well as the unexpected excursions that occur between the rehearsals and the actual event. Like all members of the cast, Nick eventually came face-to-face with the specter of his darker, inner self, which in his case took the guise of Emperor Nicholas the Puissant. Kidnapped by Duchess Ki Oshiro on the eve of his wedding, Nick was forced to attempt to replicate the inter-dimensional transport capabilities of the MUTEX to allow the Emperor to conquer other universes. Although he attempted to stall the process, he ultimately failed to reproduce the transport's functionality. Nick and his friends eventually returned to their home universe relatively unscathed, if a little unsettled by the experience of meeting their alternate selves.

Unknown to Nick, he has been given the nickname "Mirage" by one faction of the Brotherhood of the Twisted Pair. The Brothers began watching him after discovering that his IP address sporadically used tons of encrypted bandwidth for unknown reasons. (Presumably this traffic must be generated by the MUTEX, which uses the Internet to generate virtual reality data.) After he defeated "Lord Catastro", a hacker who cracked and radically altered one of the Bog of Bloodbath game servers, the Brothers stepped up their surveillance, noting that Nick must possess "considerable skill".

When Nick and Trudy were sent by Dwayne on a business trip that would last about a week to meet with Lakatos Pharmaceuticals, no one liked the idea of them being alone together for that long but there were few other viable alternatives. During the trip, the pair stumbled upon a convoluted plot to "induct" small business leaders into a mysterious collective supposedly controlled by "the Colonel and the Key Master". During their attempts to evade capture, Trudy's true identity was revealed, which Nick did not take well. Before they could come to a resolution on the matter, their getaway car crashed, sending them to the hospital. Nick spent the remainder of his time there in a coma as plots swirled around him. Just as a mysterious assassin attempted to murder him, a second, more familiar face arrived to carry out the same task. Emperor Nicholas, flung seemingly at random into our own dimension, confronted the assassin and killed him, only to be assimilated by the assassin's controllers. Before the alien invaders could remove Nick from the hospital to dissect him, he was beamed away by an unknown force. Taking the setback in stride, the invaders put Emperor Nicholas in Nick's place, replicating his injuries and feigning amnesia so he could complete their mysterious plans. For a considerable amount of time, the true Nick's whereabouts were unknown to just about everyone.

During Scylla and Charybdis, it was finally revealed that Nick had been aboard a Grey research vessel. Known only as "Subject QR7-T64", he suffered from amnesia and had no memory of who he was. The Greys had apparently been monitoring him for some time due to his "exceptional technical abilities", and beamed him aboard when he was detected to be in the presence of several of their enemy's agents. When they discovered his amnesia and were unable to correct it, they held onto him for study. Fooker subsequently convinced the Greys to beam up Ki in the hope that she could "unlock [their] secret weapon". When talking to and kissing Nick didn't completely work, she seduced him, which finally broke his amnesia. When Nick learned that the Greys were about to attack the Physarics, he had one drone beam up the MUTEX and Velociraptor then attempted to open negotiations between the humans, Greys, and Physarics. When Colonel Lionel Barker accelerated his plans, Nick retaliated by breaking the Physarics' control over all humans. This gave the Grand Protuberance the chance to initiate the Greys' attack, forcing the Physarics to fall back to the Earth as a defense. In a desperate ploy to protect the Earth from the crossfire, Nick used the MUTEX/Velociraptor combination to seemingly "destroy" the planet, actually hiding it in an alternate universe. Unfortunately, his desperation meant he wasn't fully prepared for this drastic action, and in the process he "lost" the Earth among the sea of infinite realities. Grief stricken, Nick became despondent until Patty literally knocked some sense into him. With the Grey/Physaric War now in an uneasy truce, Nick leads the rest of the gang in an effort to find and recover the Earth before "freezer burn" sets in.

In Sharon's dream world of Harry Barker, Nick fills the role of Sirius Black from Harry Potter. Convicted of the crime of murdering Petey Petagrue and twelve "luddies", he was locked away in Angband Prison for twelve years until his mysterious escape during Harry's third year at Hollerith's. Although many (including Harry) were convinced that "Serious" Nick had escaped to murder Harry and thus finish the work of his supposed master, Gnawthrylilees, he was in fact in search of Petagrue, whom he saw alive and well in a photo of Don and his family and whom Nick knew was the true betrayer of Harry's parents. Nick was a genius with virtual reality technology and created all of the VR equipment embedded within Hollerith's castle. He used this technology to transform his appearance into that of the Grue, a skill he and his friends used while at Hollerith's to help their friend Dwayne deal with his curse of turning into a Beowulf. He was also one of the creators of the Hooligan's Hash, a tablet-like device that mapped every secret passage and movement within Hollerith's castle. Although never exonerated of his "crimes", he was nevertheless saved from actually murdering Petagrue in revenge, then again saved from the debuggers by Harry and Harmony and allowed to go into hiding. He earned the nickname "Serious" due to his ability to maintain a deadpan, stoic expression while cracking jokes.

Some people have accused me of basing Nick on myself. I say this is purely hearsay. As proof, I give you a picture of Nick, and a picture of me. I'll let you be the judge:

Note the conspicuous lack of mustache on Nick, and the missing cowlick on me. No matter that I retouched the photo, so the cowlick is gone; it's not there now. Nick is also suspiciously missing a mouth. How he eats is beyond me.

See, I figured you'd agree with me. No resemblance whatsoever.