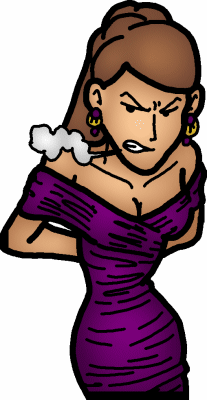 Full Name: Uncertain; "Nikki Ronat" may be her real name but may also be a pseudonym

When Nick and Trudy are sent on a business trip to meet with Lakatos Pharmaceuticals, they share a table during the the big banquet with Nikki Ronat, a young woman who claims to be the vice president of sales for a small chemical company. After a few catty remarks are shared between her and Trudy, Ronat begins to question her table mates about their companies' relationships with Lakatos. She raises suspicion over the fact that Lakatos chose to deal almost exclusively with small businesses, passing over what must certainly be less expensive contracts with larger suppliers and shippers. She doesn't get much of a chance to explain her theories, however, as the banquet soon begins and Trudy drags Nick out of the ballroom to tail the equally suspicious Adrienn Lakatos.

Nick and Trudy wander about the resort but are quickly captured by the "Smoking Man" and his paramilitary guards. Also captured by the guards is none other than Ronat, whom the Smoking Man reveals to be a federal agent. Claiming they "can always use another mole in the Bureau", the Smoking Man "forcibly inducts" Ronat by having his men hold her down, back and neck exposed, as another guard pours something out of a mysterious container. Ronat "rejects" the "induction", showing seemingly inhuman strength as she hurls the men restraining her backward. She runs off into the darkened warehouse screaming as the Smoking Man and his men pursue her, leaving Nick and Ki with a single guard, whom they quickly overpower and escape from.

When they attempt to sneak out of the resort, they run into Ronat again, although this time she acts very differently. She practically drapes herself upon Carl Meadows, another banquet attendee whom she showed contempt for before. Ronat seems suspicious of Nick and Trudy when they claim they too have been "inducted", but Meadows dismisses her concern, giving our heroes a chance to escape.

Aside from these events, we know little else about Ronat. It could be inferred that being a "Fed" and working for "the Bureau" means that she was an FBI agent, likely undercover, but that is never explicitly stated. She apparently was investigating Lakatos Pharmaceuticals for some reason, but exactly why remains unclear. Her current whereabouts, as well as whether she remains "inducted" or not, are currently unknown.