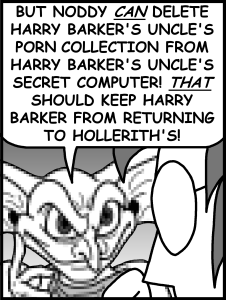 First Appearance: Harry Barker and the Chatroom of Enigmas (November 12, 2010)

In Sharon's dream world of Harry Barker, Noddy is a network sprite, a "digital creature" in the service of Luser Mouso and his family. As such, he is bound to follow the orders of his user no matter what and, given who his user is, this makes his life miserable. However, Noddy also shows a strong sense of independence and defiance, implying that if he were not bound by his servitude, he would be a far different person.

We first encounter Noddy during "Harry Barker and the Chatroom of Enigmas". At the beginning of the story, Noddy attempted to "protect" Harry by isolating him from his friends and preventing his return to Hollerith's. He intercepted all of Harry's incoming mail, then erased Trent's secret porn collection in the hope that Harry would be blamed and would be held back from school. This, of course, was because Noddy was aware of Luser's efforts to have the Chat Room of Enigmas reopened, but he was forbidden to explicitly warn Harry about it. After Harry found and survived the Chat Room of Enigmas, Luser, with Noddy in tow, came to Tim Dumpingcore's office while Harry was present. While Dumpingcore and Mouso verbally sparred regarding the nature of Gnawthrylilees' disc, Harry learned from Noddy that if a sprite is given his own user ID, he becomes free from his user. Harry then tricked Mouso into giving Noddy Harry's ID access card, effectively giving Noddy a user account. Freed from his servitude, Noddy protected Harry when Mouso attempted to attack him.

Noddy is the analog of Dobby the House Elf from Harry Potter. His name comes from this Jargon File entry, where it is an adjective describing something "small and un-useful, but demonstrating a point."