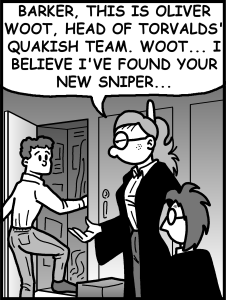 In Sharon's dream world of Harry Barker, Oliver is an older student at Hollerith's School of Phreaking and Hacking and captain of the Torvalds Subnet Quakish team. He is several years ahead of Harry in his education. He has dark brown curly hair and is rather tall and thin for his age. He is one the three Runners on the Torvalds Quakish team and is well known for his lightning-quick reflexes and agility at dodging incoming fire.

Woot is the analog of Oliver Wood from Harry Potter. His name comes from the common Internet exclamation "w00t w00t!" (with zeroes instead of the letter "O", and often with lowercase letters).