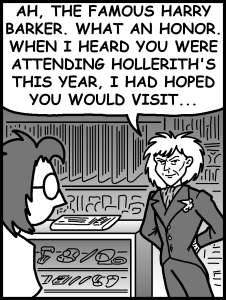 In Sharon's dream world of Harry Barker, Mr. Olivetti is, according to Dexter, the "finest maker of input devices around," specializing in mice, trackballs, light pens, and especially keyboards, all of which are essential to the hacker way of life. Olivetti sold Harry his first keyboard, stating that only one other like it was every made. The owner of the twin keyboard did "great things... terrible things, but great nonetheless," and it was the owner of that keyboard that gave Harry his distinctive scar. Olivetti's shop is located on Bogon Alley.

Mr. Olivetti is the analog of Garrick Ollivander from Harry Potter. He gets his name from an Italian manufacturer of typewriters, computers, tablets, smartphones, printers and other such business products. The company created one of the first commercial programmable desktop computers, the Programma 101, in 1964.