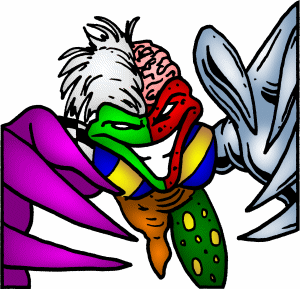 Gender: Neuter, although he assumes a male personae

Distinguishing Characteristics: Body and costume appear to be randomly assembled from many different humanoid parts; face is split vertically in half with different skin color, texture, and hair on either side

One of the greatest mysteries of the GPF multiverse is the identity and motives of Pandemonium. Like the Gamester, he is an extradimensional entity, a seemingly omnipotent, non-corporal creature existing outside our understanding of time and space. Unlike his contemporary, however, Pandemonium apparently cares little for the laws of the Cosmos or the mortals it contains. In blatant defiance of the Interdimensional Council, he lives purely for chaos, seeking to disrupt order and structure wherever it exists.

Although his first appearance isn't until late in the archives, Pandemonium's influence has affected the lives of GPF Software's employees for years. According to Mischief, he was responsible for helping Trudy initiate the cyclical temporal paradox that created her alternate future self and nearly destroyed GPF's universe. Later, it was revealed that he counseled Emperor Nicholas the Puissant, Nick's alternate self from another universe, providing him with information that allowed him to spy upon our heroes and even kidnap Nick. Both of these events, involving the tampering of both time and space, are in strict violation of cosmic law and may have potentially resulted in the destruction of the Cosmos as we know it if other forces had not intervened.

During the climax of To Thine Own Self..., the Gamester stepped into the "negaverse" himself to confront Pandemonium face-to-face. The pair apparently mutually annihilated each other, leaving little or no trace of their existences. Mischief attempted to resurrect the Gamester by putting what she thought were his remains in a protoverse in the Celestial Nursery, only to discover the remains belonged to Pandemonium instead. Pandemonium then attacked Mischief, leaving both her and the Gamester's fates uncertain. Pandemonium is now at large somewhere in the Cosmos, presumably unopposed, leaving the fate of the multiverse in an ominous state of uncertainty.