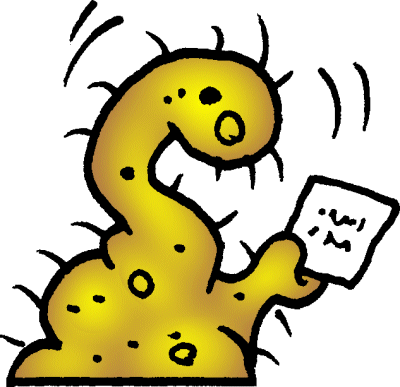 Distinguishing Characteristics: Generally passive but with a sweet, caring streak; cilia covering most of her surface area

Persephone is a "sentient slime mold" who split from Fred when he underwent mitosis. Although she should technically have the same DNA as Fred (mitosis, of course, is simple cellular division, which results in two identical cells), for some reason she is yellow in color and tends to have a distinct, more feminine personality. (It's a comic strip. So sue me.) Persephone adores Fred in what seems like a romantic fashion and seems to have a naiveté about her that gives her an almost child-like quality. However, she occasionally shows flashes of brilliance that hint at a much deeper intelligence.

"Pers" was an important link for Ki back to her friends back at GPF during Surreptitious Machinations, having stowed away in Ki's luggage when she left to help her parents. We know Persephone had a special place in Todd's heart, but we don't know what role she played in his development. She has also been known to occasionally baby-sit Sydney for Dwayne and Nicole. Usually, however, she tends to step back and let Fred get all the glory, while she takes enjoyment in merely being his cheerleader. She currently acts as his secretary, taking his many publicity calls. As far as we know, while Fred's existence is publicly known, Persephone is still uknown to the world at large.

Persephone did have a few moments in the spotlight when she stowed away in Ki's backpack and rode into the alternate universe of To Thine Own Self.... She briefly tangled with the Grey aliens Pi and Planck, but eventually returned with her friends back to their home world relatively unscathed.

During Scylla and Charybdis, Persephone shared Fred's (and everyone else's) shock to discover that she is actually an alien. Spending much of the story hiding in Trish's purse, Persephone heard Socrates reveal Fred's origins and arrival on Earth, as well as Colonel Barker's covert plan to pit the Physarics and Greys against each other. At the end of the story, Persephone, Fred, and Socrates all agreed to keep her existence a secret from the Syncytium, since both her and Fred's DNA could cause an imbalance the tenuous peace resulting from the story's climax.