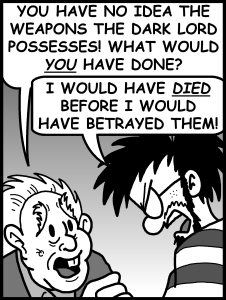 In Sharon's dream world of Harry Barker, Petey Petagrue was the childhood friend of Jason Barker, Sharon Murphy, Nick Wellington, and Dwayne Duncan. The five of them all attended Hollerith's School of Phreaking and Hacking at the same time, and the four boys became close friends. Together, they created the Hooligan's Hash, a tablet-like device that mapped every secret passage and movement within Hollerith's castle. They also experimented heavily with virtual reality, which Nick was a genius at manipulating. Sometime during their experiments, Dwayne became "corrupted" by a VR construct and was transformed into a Beowulf. To help him cope with this affliction, the others assumed various VR personae. Nick became the Grue, while Petagrue assumed the form of an ordinary computer mouse.

At some point after graduating and during the reign of terror instigated by Gnawthrylilees, Petagrue fell under influence of the Dark Lord and betrayed the location of Jason, Sharon, and their newborn son Harry to him. This resulted in the Barkers' murder. Enraged, Nick attempted to track down Petagrue, but Petagrue caused a massive explosion that murdered twelve "luddies". He then cut off his own finger, making it appear that Nick had triggered the explosion in an attempt to murder Petagrue. For this "crime", Nick was sentenced to Angband Prison. Petagrue then went into hiding, eventually coming to live covertly among the Measly family, where he became Donald Measly's input device, Scribbles the Mouse.

During Harry's third year at Hollerith's, "Serious" Nick escaped from Angband after seeing "Scribbles" in a family picture of the Measlys while taken on vacation. When news of his escape became public, most assumed that Nick had escaped to find and murder Harry and thus finish Gnawthrylilees' work. Harry's first clue that Petagrue was still alive came when he saw Petagrue's name on the Hooligan's Hash, which should have been impossible since Petagrue was supposed to be dead. When Harry told Dwayne of this, Dwayne was skeptical, but this raised doubts about Nick's guilt. When Harry, Don, and Harmony sought a way to prevent Buckybits' "execution", Scribbles was discovered nearby then scurried away. Don caught the mouse but was then overpowered by the Grue, which dragged Don and Scribbles into the Spamming Shack. Harry and Harmony quickly followed. There, the Grue was revealed to be "Serious" Nick and Scribbles to be Petagrue. Nick set the record straight by announcing that it was Petagrue, not himself, who betrayed the Barkers to Gnawthrylilees. Nick and Dwayne were ready to kill Petagrue until Harry intervened, stating that Petagrue should be held accountable for his crimes. When the group reached outside, however, Dwayne involuntarily transformed into the Beowulf. Nick transformed into the Grue to protect the children. During the confusion, Petagrue stole Dwayne's dropped trackball and transformed himself back into Scribbles, then scurried into the dark. He is presumed to still be at large.

Petey Petagrue is the analog of the character Peter Pettigrew from Harry Potter. Aside from from being a homophone of the original character's last name, his is a combination of SI prefix "peta-" and the famous Zork monster, the grue. It can also be interpreted as "pet a grue", which led to a humorous entry in the GPF Premium exclusive Jeff's Sketchbook.