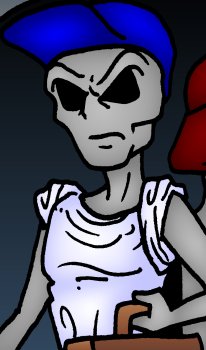 Formally known as Drone #3141592, "Pi" was one of two Grey Aliens who acted as liaisons to the resistance against Emperor Nicholas the Puissant in the alternate universe of To Thine Own Self.... Absent of the Great Skaboola's influence, he was gruff, irritable, and serious, tending to be entirely no-nonsense and to play things by the book. That said, he also had an acidic sarcasm that surfaced from time to time. His nickname, presumably given to him by his human associates, comes from the similarity of his numerical designation to the mathematical constant π.

Pi was often seen paired with Drone #6626168, or "Planck". Together, the pair made for a classic odd couple, with Pi as the straight man and Planck the comic buffoon. One could definitely say that Pi got the raw end of that deal, to which he would readily agree.

While Pi had displayed a very low opinion of humans and their technology, he did seem to genuinely care for the plight of the resistance. He believed the Greys were responsible for the state of the "Negaverse", with the Skaboola's pact with the Emperor leading to their enslavement and to the eventual invasion of Earth by the Greys' extra-terrestrial enemies. It is out of this sense of responsibility that Pi acted on the resistance's behalf, working with the Greys under the Emperor's nose to undermine the Empire's stranglehold upon the Earth.

Pi's current fate is unknown. When we last saw him, he took great pleasure in calling in air strikes from orbiting Grey motherships to target "anything that moves." Whether that was restricted to just the Grey's alien adversaries or whether the Emperor's and resistance's forces were included as well is unknown.

For some time we were unable to formally identify Pi's "real" or "prime" universe counterpart, since all Grey drones are mostly alike under the Skaboola's control. However, when it was revealed that "Mister Inertia" was a Grey construct—a "mech"—designed to infiltrate C.R.U.D.E., we learned that not only was Drone #3141592 the mission commander of the "Inertia" project, but he was present both times when Fooker was abducted by the Greys. He and Drone #6626068 remained in U.G.A. "custody" for some time, sneaking out at night to hack into the U.G.A.'s computers and gather intelligence on the potential impending invasion of Earth by their archenemies, the Physarics.

During Scylla and Charybdis, Pi and Planck used "Mister Inertia" to help Justin escape U.G.A. headquarters after it became apparent the organization had been taken over by the Physarics. The trio proceeded to find Fooker, inadvertently endangering him and Sharon when they realized that the U.G.A. was probably tracking them. Pi used components within the Inertia mech to signal the Grey survey ship in orbit and have the group teleported aboard. There, they met with the Great Skaboola, who ordered Pi and Plank to relay the history of the Grey/Physaric war to their human guests. Both Greys were present during the climactic showdown between Nick, the Grand Protuberance, and Colonel Lionel Barker, although they were mostly witnesses and not active participants to these events.

In the aftermath of Scylla and Charybdis, Pi and Planck were assigned by the Skaboola to be liaisons between the human "survivors" and their Grey hosts. Pi has been selected to work closely with Fred to learn how to operate the MUTEX, although Pi's past experiences with Physarics made him initially hostile to the idea.

During their long stint on Earth in U.G.A. custody, both Pi and Planck developed a growing sense of independence from the telepathic control of their Skaboola. This has allowed their personalities to become more distinct compared to their counterparts who remained aboard the Grey ship. Although they have become more aware of their growing independence, it is currently uncertain how much the Skaboola has noticed.