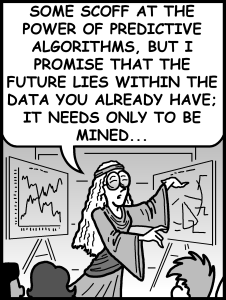 First Appearance: Harry Barker and the Prisoner of Angband (July 11, 2016)

In Sharon's dream world of Harry Barker, Oracularity (first name unknown) is the professor of Predictive Analytics at Hollerith's School of Phreaking and Hacking. She is a tall, thin woman with long, unkempt hair and extremely thick glasses. She dresses primarily in flowing skirts and shawls and frequently wears a headband. As professor of Predictive Analytics, she is a strong believer in predictive algorithms and data mining, and often rejoices when she perceives that one of her students is "in The Cloud".

Oracularity first appears in "Harry Barker and the Prisoner of Angband" when Harry, Don, and (eventually) Harmony attend her first class of the year. Harmony views predictive analytics as a ridiculous pseudo-science and quickly dismisses it; Oracularity responds by stating that "not all have the gift" and that Harmony's "probits and logits have regressed" and her "least squares are as ordinary as they come." Conversely, she senses that Don is "in The Cloud" and asks him to look into Harry's data. When Don claims to see something hairy and smelly, Oracularity panics, proclaiming that he has seen "the omen of death, the specter of darkness": the Grue. Later, Harry forgets his tablet in Oracularity's classroom and returns to retrieve it. When he speaks to the professor, she seems to be in a trance. In a robotic monotone, she prophesies that "Tonight, he who betrayed his friends, whose heart rots with murder... shall break free. Innocent blood shall be spilt... and servant and master shall be reunited once more!" Immediately after making this proclamation, she snaps out of the trance, unaware of even making it. This, of course, is a prediction of Petey Petagrue's return, although misdirection throughout the story implies that it refers to "Serious" Nick instead. The "innocent blood" to be spilt would be Don's when Nick (disguised as the Grue) accidentally injures him while trying to capture Petagrue.

Oracularity is the analog of Sybill Trelawney from Harry Potter. Her name is derived from the "Oracularities" of the Internet Oracle. Predictive analytics comprises a number of statistical techniques from predictive modeling, machine learning, and data mining that analyze current and historical facts to make predictions about future or otherwise unknown events; as such, it makes the perfect technological counterpart to Trelawney's Divination class.