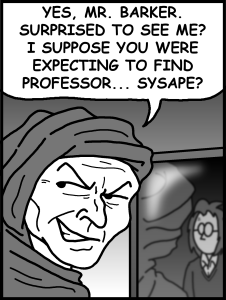 In Sharon's dream world of Harry Barker, Professor Quux was one of many professors on the faculty of Hollerith's School of Phreaking and Hacking. He was an older man usually dressed in long flowing dark robes and a turban wrapped loosely about his head. For fans of Harry Potter, his approximate counterpart would be Professor Quirrell.

At first, we saw very little of him other than seeing him in the background of various strips. Harry later witnessed a confrontation between him and Professor Sysape, in which they discussed whether Quux knew the Kerberos password and where both seemed to be aware that Gnawthrylilees may still be alive. Eventually it was revealed that Quux was actually in the service of Gnawthrylilees, who secretly sought the Napier's Bones for unknown purposes. Beneath his turban, Quux's bald head was covered with covert electronic surveillance equipment operated remotely by Gnawthrylilees. Quux attempted to use Harry to extract the Bones from the Mirror of Awkandsed, where Professor Dumpingcore hid them. When Harry destroyed the Bones to prevent Quux from obtaining them, Quux activated a small laser cannon hidden among the equipment attached to his skull. Quux fired the laser but Harry deflected the beam using the Mirror's polished monitor, reflecting the blast back at Quux and apparently killing him.

Quux derives his name from this Jargon File entry, which states that "quux" is often used as a metasyntactic variable along the same lines as "foo" and "bar". That said, the variable has gone on to acquire a few more... colorful definitions over the years....