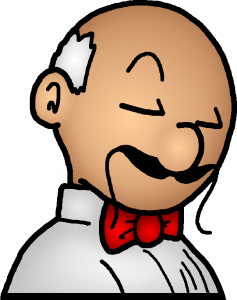 Hair: White, although balding; mysteriously, his mustache is black

For decades, Reeves was the personal butler to the wealthy Esther and Victor Glowerhausen. While devoutly loyal to his employers, he is also sarcastic, droll, and has a perverted fascination with their daughter, Trudy

Little is known about Reeve's past. We do know that he served briefly in the British Royal Marines and was deployed during the Falklands War. Presumably discharged due to injuries sustained during the conflict, he somehow made his way to the United States where Esther Glowerhausen took him. Whether or not being a butler was the initial reason for his hiring is unknown, but he quickly became involved in Esther's vast criminal activities and ultimately became her confidant. Reeves became so intertwined with her illicit activities that she deemed him "too close to let go", and it is possible he may have once resorted to blackmail to stay under her employ.

During his stint as the Glowerhausens' butler, Reeves was responsible for many routine butlering tasks. Yet beyond serving dinner and drinks and drawing baths, he would often be called upon to use skills from his prior life to dispose of unwanted "clients" who came to the front door. He also used his virtually unfettered access to the Glowerhausen mansion to spy on the adolescent Trudy, going so far as to place a video camera in her shower and other covert surveillance techniques. When Esther became pregnant with an unexpected second child, it was Reeves who helped conceal the child's birth from her father.

However, after several decades of loyal service, Reeves was recently and unexpected let go and forced to seek employment elsewhere. Trudy and Sharon accidentally ran into him working at a shopping mall tuxedo store, where he explained that Esther's business had "evolved", and that a new business partner—a "dapper fellow, older chap, a military man I'm certain"—had kept his former mistress on the move. Since his severance, Reeves has had no contact with either of his former employers.

The name "Reeves" is a play on quintessential valet Reginald Jeeves from the short shorties by P. G. Wodehouse. A reeve may also be an elected official in a number of European countries, especially England. Reeves was originally intended to be a throw-away stereotypical butler, but when I hit upon the idea of him being a perverted old man who surreptitiously spied on Trudy, his personality began to take shape.